HONG KONG (AFP) - As Hong Kong prepares to celebrate the Year of the Pig, the city is facing its own peculiar porcine pickle - a furious debate about what to do with its growing and emboldened wild boar population.

And increasingly, humans and pigs are meeting face to snout.

Boars have been filmed running alongside vehicles on roads, jogging down beaches filled with sunbathers, sniffing the tarmac at the city's international airport - and even falling through the ceiling of a children's clothing store.

Easy pickings from rubbish bins and open air barbecue pits as well as humans deliberately feeding them have enticed the wild animals to leave their trotter prints across a growing swathe of the concrete jungle.

The situation has some people rattled.

"They are dangerous to pedestrians, as they rush down the hill. They pose threats to the older and the weak, hazards to traffic and hikers," local councillor Chan Chit Kwai, who wants to see steps taken to reduce the wild boar population, told AFP.

"It's not as easy as those people saying we can all just live in peace," he added.

City authorities say the number of sightings and nuisance reports caused by boars has more than doubled, from 294 for all of 2013 to 679 for the January to October period last year.

Injuries have been reported. In October, two elderly people were bitten by a wild boar near a public estate while four months earlier two people needed stitches after they were attacked near the University of Hong Kong, local media reported.

The city's Agriculture, Fisheries and Conservation Department (AFCD) is now considering euthanising "high risk" wild boars that are deemed aggressive or have a record of attacking humans.

"In those cases, we would use drugs to euthanise the wild pigs," conservation officer Cheung Ka Shing told reporters. The agency has also sterilised 54 wild pigs who regularly appear near urban areas and relocated 92 others to more remote locations.

Some local politicians have proposed more active measures such as introducing predators, legalising hunting and even relocating pigs to an uninhabited island - the latter idea getting short shrift given that pigs can swim.

But many baulk at harming the boars.

Near the entrance to Aberdeen Country Park on the main island, a wild boar family of three is snoozing under warm sunlight - a trio of elderly Hong Kong residents playing cards just a few metres away.

"I'm not scared. As long as you don't poke them or throw things at them, it will be fine," said 73-year-old Mr Fung, one of the card-players said.

"They have made the Aberdeen country park an attraction," explained another park regular, 70-year-old Mr Lai, who said he encounters boars often while hiking.

"As long as you don't attack them, they won't offend you. It's too brutal to kill them," he added.

The AFCD said it does not have an estimate of the total population of wild pigs in Hong Kong but country park camera surveys have recorded an increase in number and a wider spread than 20 years ago.

Experts say the wild boars' diet is 90 per cent plant based and that there is no need for them to be fed by humans, who they would normally avoid.

"They shouldn't come to people for food, nor to attack. Their aggressive behaviour would be an act of self-defence," said Mr Chan Po Lam, a wetland and fauna conservation officer at the AFCD.

In the Aberdeen park, a banner warns visitors not to feed wild animals. 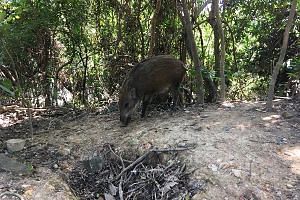 Wild boar in the city: Hills around Hong Kong's skyscrapers are alive with swine

But some ignore it. During AFP's visit a man scattered pieces of white bread on the grass, soon drawing a thankful boar from the bush.

"I believe people feed wild animals out of kindness, but it encourages them to hang out in human communities more often," said Mr Chan.

Ms Veronique Che, from the Hong Kong Wild Boar Concern Group, says the animals shouldn't be blamed for being more visible given the urban sprawl increasingly encroaches on their natural habitat.

"Many problems related to wild boars are actually created by humans," she said.

Just down the road from Aberdeen Country Park is a public housing estate with residents waiting for buses on a narrow winding roadside.

The local boars have burrowed under a metal fence separating the forest from the housing estate to look in the rubbish bins for food.

As a group of boars appeared, locals took photos on their phones while children greeted their hairy neighbours with excited "oink" noises.

"There should be harmony between human and wild boars," Ms Che said. "Humans shouldn't treat wild boars as threats, nor as pets."