HONG KONG - Hours after news of his detention by Thai authorities in Bangkok made international headlines on Wednesday (Oct 5), pro-democracy activist Joshua Wong was flown back to Hong Kong where he described his detention as illegal and said he was lucky to be home.

Mr Wong, 19, was detained at Suvarnabhumi airport after arriving on a flight from Hong Kong on Tuesday night. His detention was announced by his political party Demosisto in a statement on Facebook, and blamed on pressure exerted by China.

Mr Wong told reporters on his arrival at Hong Kong airport at about 4pm on Wednesday that he was taken to a police station in Thailand by more than 20 police and customs officers and placed in a lockup.

"I was placed in lockup by 2am. I repeatedly asked to be allowed to call a lawyer or my family, but my requests were rejected," said Mr Wong.

"I also repeated asked what was the reason for detaining me and no one offered me any explanation. I feel this is an illegal detention.

"Then in their limited English, the officers told me that I am not allowed to enter Thailand because I have been blacklisted.

Mr Wong said he was very disappointed with the Thai government for detaining him for 12 hours without explanation.

"Just before I boarded the flight this afternoon, I was handed a piece of paper which says that I have breached a rule of the Immigration Act," he said. 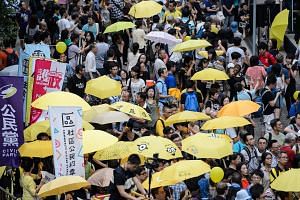 Demosisto was founded by Mr Wong, Mr Nathan Law and other "Umbrella protests" leaders against Chinese political influence. It calls for Hong Kong's right to self-determination.

Mr Wong had been invited by Mr Thai student activist Netiwit Chotipatpaisal, 20, to address students at Chulalongkorn University to mark the 40th anniversary of a massacre of students in 1976.

Demosisto cited Mr Netiwit, who was waiting for Mr Wong, as saying the Thai authorities had "received a letter from the Chinese government" regarding Mr Wong's visit.

"According to Chotipatpaisal, the Thai authorities have received a letter from the Chinese government earlier regarding Wong’s visit. His request to see Wong, who is still currently in custody, has also been declined," said the Demosisto statement.

Thailand's foreign affairs ministry spokesman Sek Wanamethee told The Straits Times in a text message that the government "does not prohibit the expression of personal opinions on the political situation in Thailand", pointing out that the Chulalongkorn seminar was permitted to be held.

He said permission to enter Thailand for Wong "involves various factors" and the foreign affairs ministry was reviewing the facts with the Immigration Bureau and relevant authorities.

China’s Foreign Ministry, when asked about Mr Wong’s detention, said it had “noticed the relevant reports”, Reuters reported. “China respects Thailand’s exercise of immigration control according to the law,” the ministry said in an email according to the report.

Demosisto co-founder Nathan Law, 23, said at a press conference late Wednesday morning that he learned about the detention from friends in Thailand.

Human Rights Watch denounced Mr Wong's detention in Bangkok and called for him to be released immediately.

"Thailand's arrest of Joshua Wong, a well-known pro-democracy activist in Hong Kong, sadly suggests that Bangkok is willing to do Beijing's bidding. Wong should be freed immediately and allowed to travel and exercise his right to free expression," said Ms Sophie Richardson, China director of Human Rights Watch.

Speaking about the visit, Mr Netiwit had told the South China Morning Post newspaper that Thailand could hold protests similar to the Umbrella movement.

Mr Wong was also denied entry by Malaysia in May 2015 when he was due to give a series of talks on democracy in China.

"After being refused entry into Malaysia last year, I thought perhaps this could happen in Thailand too, but I never expected to be placed in a lockup cell," the teenager told reporters in Hong Kong on Wednesday.

"I am exhausted. This last 12 hours have been very stressful for me. Luckily I am able to return to Hong Kong," he said.

"If I can't return, I can't imagine what the situation will be. Especially since the Causeway Bay booksellers went missing. Luckily I didn't become the next person to go missing," he added, referring to five Hong Kong-based booksellers who sold books critical of Chinese leaders and went missing last year - before resurfacing months later in detention on mainland China.