HONG KONG • Hong Kong Customs officers have busted a massive endangered species smuggling operation from Africa, seizing a record quantity of pangolin scales, along with more than 1,000 ivory tusks, as the authorities step up the fight against illegal wildlife trafficking.

Originating in Nigeria, the shipment was bound for Vietnam, the officials added.

In a separate incident, Customs officials in the northern Vietnamese port of Hai Phong discovered 1.4 tonnes of pangolin scales in a shipping container sent from Nigeria, the state-run Vietnam News Agency reported yesterday.

Last October, Vietnam intercepted more than eight tonnes of pangolin scales and ivory, also from Nigeria, in one of the South-east Asian country's largest wildlife trafficking cases in years.

The Chinese territory of Hong Kong, located on the country's southern coast, is a global black spot for wildlife trafficking.

The city is a key transit point, supplying an array of wildlife products including timber, shark's fin and rhino horns across Asia and, particularly, China.

On Jan 16, Customs officers seized about 8,300kg of pangolin scales and 2,100kg of ivory tusks at the Kwai Chung cargo port located in the former British colony.

It was the largest single seizure of pangolin parts in Hong Kong. 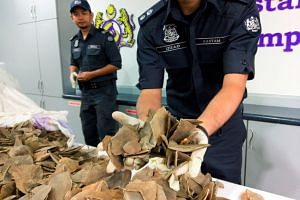 Mr Yeung Ka Yan, head of command at Hong Kong's Customs and Excise Department, said the smugglers used a new method to hide the endangered species by a process of "solidification", where they used ice bags and frozen meat to obscure the species.

"The low-temperature environment created by the ice bags and frozen meat helped mask the distinctive smell of the pangolin scales."

Pangolins, also known as scaly anteaters, are critically endangered. They are coveted for their meat - considered a delicacy - and their scales, which are used in traditional Chinese medicine to treat aliments from cancer to arthritis.

"It is clearly impossible that the pangolin species can withstand such high rates of poaching, trafficking and trade. Eight tonnes is outrageous," said Mr Alex Hofford, campaign manager for conservation group WildAid in Hong Kong.

WildAid estimates that 100,000 pangolins are poached from the wild each year, with all eight species of pangolin in Africa, and especially Asia, now under threat.

Customs officials who worked with their mainland counterparts to intercept the goods, found the species buried under frozen meat inside a refrigerated container.

Officials said two people had been arrested in connection with the case.