The Hong Kong Observatory on Monday (Sept 17) lowered its rating on Typhoon Mangkhut, which carved a deadly path through the Philippines earlier and is now battering China's Guangdong province, by one notch to Strong Wind Signal No. 3.

"There are still strong winds generally over the territory, while occasional gales are affecting high ground," the observatory said in an advisory.

Across the city, authorities strived to clear roads of debris, including toppled trees and bamboo scaffolding. Some buildings, including the One Harbourfront office tower, had many windows smashed after a day in which some of the city’s skyscrapers had swayed with the ferocious gusts.

“Yesterday’s storm was very strong. Even for a person of my weight, I was about to be blown down by the wind which made me very scared,” said a 70-year-old resident surnamed Fung.  “It was very serious this time.”

Stock and financial markets opened as normal on Monday in Hong Kong and the southern Chinese city of Shenzhen.

Mangkhut had shut down the city all day Sunday after the Observatory gave the storm its highest warning signal. Hong Kong escaped the brunt although media reports showed images of apartment building windows being blown out, trees toppling, scaffolds collapsing and a crane falling off a building at a construction site.

Hong Kong Airport is trying to get business back to normal. More than 1,400 flights had been cancelled across the region, according to Flight Aware. Cathay Pacific Airways said it expects a gradual return to scheduled operations, but there will be continued delays and some cancellations. 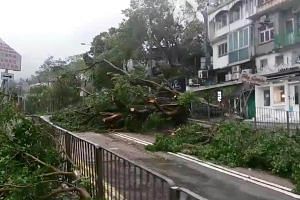 At least 25 die in Typhoon Mangkhut havoc in the Philippines, rescue official says

In Macau, badly hit by a super typhoon last year, authorities were much more prepared this time, ordering casinos to close late on Saturday night as the storm approached.

Casinos were operational again early on Monday though authorities were still struggling to restore power to some of the 20,000 households that suffered power cuts.  Macau gambling stocks were down in early Monday trade.

It will take a while to get transportation back to normal given the disruption to flight and ferry services.

September's casino revenue growth rate could be affected by as much as seven percentage points, almost cutting in half Union Gaming's previous forecast of a 15 per cent increase, Govertsen said. It also may cut third-quarter revenue growth by two points, to 12 per cent.

In China, more than 2.45 million people were relocated and more than 48,000 fishing boats returned to ports in Guangdong province as 5pm Sunday, when Mangkhut made landfall.

All flights at Guangzhou International Airport are grounded through Monday morning.

The Philippines was worst hit, particularly the mainly agricultural north-west as the death toll topped 50. The government put losses to the nation's agriculture sector at 4.99 billion pesos (S$126.8 million), almost all of it rice, and 175,301 hectares of farm land.