The district council elections on Sunday laid bare concern over "deficiencies in the government, including unhappiness with the time taken to deal with the current unstable environment and of course to end violence", Mrs Lam said at a weekly press briefing.

The city’s chief executive pledged that her government would "seriously reflect" on the result of the community-level elections in which her pro-Beijing establishment took a severe drubbing, and would "improve governance".

In a rout that stunned the semi-autonomous territory, candidates seeking to loosen control by China seized an overwhelming majority of the 452 elected seats in the city’s 18 district councils, bodies that have historically been firmly in the grip of a Beijing-aligned establishment.

The result, the first vote to be held since protests engulfed the city,  was seen as a rebuke to Beijing and to Mrs Lam, who has dismissed calls for political reform and repeatedly suggested that a silent majority supported her administration.

The poll outcome has re-energised calls by the pro-democracy camp for direct popular elections for the city’s leadership and legislature and a probe into alleged police brutality against demonstrators.

But Mrs Lam sidestepped those calls, instead reiterating an earlier pledge to open a dialogue among all parties in the territory, a proposal that opponents have dismissed as too little, too late.

"What we need to do now is (open) community dialogue and invite social leaders to help us analyse the causes of the disturbances and Hong Kong’s deep-seated social problems, and to come up with solutions," she said.

"While the pro-establishment camp was finally awakened by votes, Lam still chooses to remain asleep, as deeply as in a coma," he said.

The embattled Mrs Lam also said she hoped the peaceful weekend was not just for the elections but a signal that people in the Chinese-ruled city wanted an end to violence. 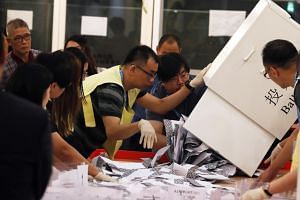 China summons US ambassador to protest against legislation on Hong Kong

"Everybody wants to go back to their normal life and this requires the concerted efforts of every one of us," she said.

"So, as I have said repeatedly, resorting to violence will not give us that way forward. So please, please help us to maintain the relative calm and peace ... and provide a good basis for Hong Kong to move forward."

Some observers say Mrs Lam, who came to power in 2017 on a platform to heal social divisions, is out of touch with the population and won’t say anything concrete unless Beijing gives her the green light.

"There’s no content in her talk, which is usual," said Mr Ma Ngok, political scientist at Chinese University of Hong Kong.  "The majority of the people still support the (pro-democracy) movement so it is up to them (Beijing) to respond. If they don’t respond with any kind of concessions, I think the protests would go on for some time."

Hong Kong has enjoyed a rare lull in violence for nearly a week, breaking from six months of often violent anti-government unrest that has plunged the former British colony into its biggest political crisis in decades.

Protests have sprung up on an almost daily basis since June, with flash mobs often gathering with little or no notice, at times forcing the government, businesses, schools and even the city’s international airport to close.

The violence had escalated up to last week, with protesters hurling petrol bombs and firing arrows at police who responded with tear gas and rubber bullets.

Demonstrators are angry at what they see as Chinese meddling in the freedoms promised to the former British colony when it returned to Chinese rule in 1997.

China denies interfering and says it is committed to the "one country, two systems" formula put in place at that time.

Police say they have shown restraint in the face of potentially deadly attacks.

Meanwhile, China’s state media cast doubt on the weekend's polls, and instead focused on violence that marred campaigning. 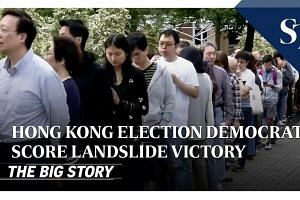 The People’s Daily said "social unrest... has seriously disrupted the electoral process," while an editorial in the English-language version of the China Daily said the election was "skewed by intimidation" and "dirty tricks" that hurt pro-establishment candidates.

The result revived speculation that Mrs Lam might be replaced by Beijing, but a Chinese foreign ministry spokesman on Monday reiterated the government’s backing.

Questioned over whether China’s leaders had asked her to take responsibility for the rout, Mrs Lam said she had received no such communications from Beijing.

She also repeated calls for a small number of protesters holed up in Hong Kong Polytechnic University campus surrounded by police for more than a week to come out peaceably.

University authorities estimate as many as 50 protesters may be hiding, too frightened to attempt an escape. Some protesters’estimates were lower, suggesting just a handful remain.