TAIPEI (BLOOMBERG) - As Hong Kong's unrest continues, some in the city are looking to the less expensive rents, leafy green streets and relative political shelter of neighbouring Taiwan as a safe haven.

The number of people moving to Taiwan from Hong Kong has risen rapidly - up 28 per cent over the first seven months of 2019 compared to a year earlier - fuelled in recent months by anti-government protests that have swept the former British colony amid fear that its autonomy from Beijing is being eroded.

Upwardly mobile entrepreneurs, salespeople and managers say they are attracted by a better quality of life in the democratically run Taiwan - including cheaper property prices, business opportunities and a safer living environment.

Hong Kong's violence has increased in recent weeks as police and protesters clash and demonstrations spread across the city, including sit-ins that paralysed its international airport for two straight days last week.

China has doubled down on support for local leader Carrie Lam amid fears that it will send in its army to restore order, and the city's economy has begun feeling the toll of 11 straight weeks of rallies. With no end in sight, some residents are looking for a way to leave.

Taiwanese President Tsai Ing-wen has been vocal in her support for Hong Kong's protesters in their pursuit of greater democracy, a contrast to the aggressive police tactics that Mrs Lam's China-backed government has used to try and subdue the rallies.

The independence-leaning Ms Tsai is up for re-election in January and has seen her support ratings rebound since the movement began, as Taiwanese voters recoil at the scenes unfolding in Hong Kong. China considers Taiwan part of its territory.

"I want to move to Taiwan because Hong Kong is in a period of white terror and ruled by the police, which scares me," said retail sales staff Steven Chen, 37, a Hong Konger who said he is working on moving to the island. "I saw no future for the city when it returned to China some 20 years ago, but now it's dangerous to live in as the police are not protecting people."

Mr Chen said he is borrowing money from friends and family to come up with the NT$6 million (S$264,903) that Hong Kong citizens need to apply for residency through a Taiwanese government investment scheme.

He said he has joined every protest since July 1 in support of Hong Kong's mostly student protesters, including one in which he was almost hit by a rubber bullet. He saw his life as being in danger.

Dozens of Hong Kong protesters involved in the July ransacking of the city's Legislative Council arrived in Taiwan last month to seek asylum, the Apple Daily newspaper reported. They were preceded by prominent activist and bookseller Lam Wing Kee, who fled to the island over the extradition legislation that sparked the current protest movement.

New arrivals from Hong Kong accounted for 9.4 per cent of all immigration to Taiwan in the first half of the year - almost double last year's percentage - according to Bloomberg calculations based on data from Taiwan's immigration agency. 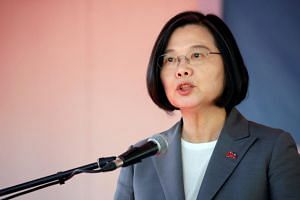 The trend is likely to continue as the Taiwanese government has no caps on relocations from Hong Kong and is open to more of its residents coming.

"We welcome them," said Taiwan's Interior Minister Hsu Kuo-yung, adding that applications from Hong Kong have risen at least 30 per cent in recent weeks.

In a late 2018 survey from the Chinese University of Hong Kong - before the protests started - Taiwan ranked as the third most popular destination for Hong Kongers planning to move overseas, after Canada and Australia.

Ms Norris Lo is another Hong Konger attracted by what Taiwan has to offer. She and her husband plan to open a pastry shop in the central city of Taichung next year. After considering countries like Australia and New Zealand, they opted for Taiwan due to its affordability.

"We want to open a small store of our own, and it's impossible to do so in Hong Kong," the 34-year-old pastry teacher said. She also cited the financial hub's soaring cost of living and densely packed environment.