HONG KONG (BLOOMBERG) - For the first time in almost two decades, home owners are in the minority in Hong Kong, underlining the city's status as the world's least affordable property market.

Only 49.2 per cent of domestic households in Hong Kong were owner of the quarters they occupied as of the end of 2017, the lowest since 1999, according to data released by the Hong Kong Census and Statistics Department this week.

Hong Kong's property prices have tripled since 1999, thanks to abundant liquidity and limited supply of apartments, according to the Centaline Property Centa-City Leading Index.

The city was named the least affordable real estate market in the world for an eighth year by Demographia, an urban planning policy consultancy, beating almost 300 metropolitan housing markets across nine countries.

By comparison, the household home-ownership rate in the greater New York area was 49.9 per cent on average in 2017, according to US Census Bureau data.

In Singapore, where the public can obtain government housing, the rate exceeds 90 per cent. 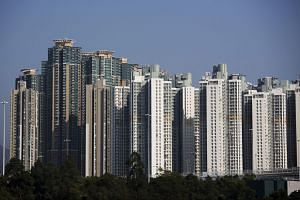 Crowds jostle for Hong Kong flats, no end in sight to housing boom

Hong Kong Chief Executive Carrie Lam has admitted that several rounds of market-cooling measures have failed to work and it's impossible for the government to curb prices.