Hong Kong's Chief Executive Office has said that the government will handle the seizure of Singapore's military vehicles according to the city's laws.

A spokesman yesterday confirmed receipt of a letter from Singapore Prime Minister Lee Hsien Loong to Chief Executive Leung Chun Ying, adding that the matter is being investigated by the Hong Kong Customs and Excise Department.

PM Lee has written to the Hong Kong leader to ask for the return of nine Terrex infantry carriers that belong to the Singapore Government.

The armoured vehicles and other equipment, which were being transported by a commercial vessel operated by APL from Taiwan back to Singapore, were seized by Hong Kong Customs when the vessel was in transit in Hong Kong on Nov 23 last year.

The Terrex vehicles were used by the Singapore Armed Forces in routine overseas training in Taiwan. 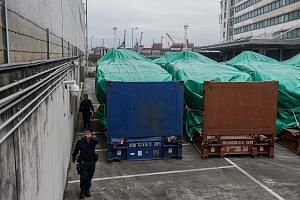 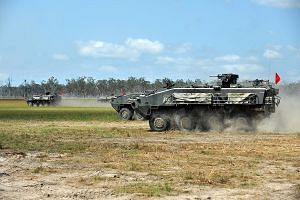 It was not the first time that an APL vessel carrying Singapore- bound military equipment had transited in Hong Kong. The city's Customs authorities have yet to give an official reason for the seizure.

They did not answer questions from The Straits Times yesterday, but said that "the case is still under investigation".

In a response soon after the vehicles were impounded, a spokesman told The Straits Times that cargo in transit generally does not require an "import or export licence" as it will remain at all times on the ship. However, such a licence will be required for "certain types of strategic commodities".

APL declined to comment if it has the proper documentation required by the Hong Kong authorities.

However, a source with the Hong Kong Customs who spoke on condition of anonymity told The Straits Times yesterday that the Singapore-bound shipment was seized due to a lack of documentation.

Singapore Defence Minister Ng Eng Hen told Parliament yesterday that as the vehicles are the property of the Singapore Government and protected by international law, they cannot be seized.

Singapore could take legal action in Hong Kong courts based on the principle of sovereign immunity of military assets, a Hong Kong-based senior lawyer specialising in marine claims was quoted as saying by Reuters news agency.

Hong Kong, a former British colony, was handed back to Chinese sovereignty in 1997.

Days after the seizure, Chinese Foreign Ministry spokesman Geng Shuang reiterated that China "firmly opposes any of the countries that have diplomatic ties with them (China) to have any form of official exchanges with Taiwan, including defence exchanges and cooperation".

Yesterday, Beijing again urged Singapore to "abide by the 'one China' principle", and called on Singapore to be cautious in its remarks and actions in handling the matter.

"We hope the Singapore side can conscientiously abide by Hong Kong's laws," Chinese Foreign Ministry spokesman Lu Kang said at a regular briefing in Beijing.

A version of this article appeared in the print edition of The Straits Times on January 10, 2017, with the headline 'HK: Case will be handled according to city's laws'. Subscribe
Topics:
More
Whatsapp Linkedin FB Messenger Telegram Reddit WeChat Pinterest Print Purchase Article Copy permalink