HONG KONG - The Hong Kong government has pulled back on proposed amendments to the city's extradition law by dropping a number of white-collar offences after the business community lobbied against their inclusion.

Nine offences, mostly economic crimes such as those related to stock trading, intellectual property rights, bankruptcy, access to a computer with dishonest intent and tax evasion will be excluded from the Bill to be put before the Legislative Council on April 3.

But the government was firm on the inclusion of corruption and bribery.

Secretary for Security John Lee said at a media briefing on Tuesday afternoon that he made the decision after discussions with the Department of Justice regarding which offences should be left out. The move was made in response to concerns raised.

Under the new legislation, a suspect or fugitive can be extradited if the offence carries a Hong Kong penalty of at least three years' jail, Mr Lee said. This is a departure from the one year stated previously.

When Hong Kong leader Carrie Lam's administration first outlined the legal amendments last month, it had said that any future extraditions to the mainland, Macau and Taiwan would be restricted to the 46 existing offences in the city's Fugitive Offenders Ordinance.

These 46 offences ranges from common criminal offences to serious crimes, such as rape, kidnapping and murder, to corporate offences including fraud, bribery, corruption and money-laundering. 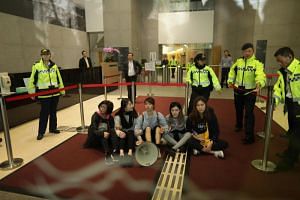 Mr Lee told reporters that while Hong Kong currently has extradition agreements with 20 countries, "not all 46 offences are included" in them.

Mrs Lam said on Tuesday that the amendments allow the government to close existing loopholes so that Hong Kong can work with other jurisdictions and prevent the city from becoming a safe haven for criminals.

The government's move followed a recent homicide case in which Hong Kong authorities were unable to extradite to Taiwan a Hong Kong resident suspected of killing his girlfriend.

The Security Bureau first made known the contentious plan last month to allow for the transfer of suspects on a case-by-case basis to any jurisdiction that Hong Kong does not have an extradition treaty with.

But local and foreign business chambers, including the Hong Kong General Chamber of Commerce and American Chamber of Commerce, as well as pro-establishment lawmakers flexed their muscles, calling on the government to exempt white-collar crimes.

There were fears that the original proposed amendments would mean that executives could find themselves handed over to the mainland for breaching Chinese laws unknowingly, given that there are vast differences in the laws across the border.

The pro-democracy group is also strongly against the original plan as its members are afraid that Beijing might demand the surrender of people wanted for political reasons.

When contacted, the American Chamber of Commerce declined comment while the Law Society of Hong Kong said "our specialist committee will review the proposals and we are not in a position to comment at this stage".

Local radio broadcaster RTHK reported that the pro-establishment Business and Professionals Alliance said the changes have eased the concerns of the business sector.

A lawmaker of the alliance, Mr Jeffrey Lam, also rejected suggestions that the government is biased towards the commercial sector.

"The nine items deleted are a concern to the public. For example, offences over computer use, offences over stock purchasing. All these are not just concerns for factory or business owners," Mr Lam was quoted as saying.

But others like Democratic Party legislator James To said he does not believe that the public's fears have been assuaged, and that Hong Kong people and others passing through the territory will be placed in a difficult situation.

"After extradition to the mainland authorities, they can still try (people) for other offences (that carry) capital punishment. They can still persecute offenders, without first trying them for political offences," Mr To said.