In his judgment, Justice Thomas Au Hing Cheung said the actions of Sixtus Leung Chung Hang, 30, and Yau Wai Ching, 25, during their Oct 12 swearing-in ceremony meant they had declined to take their oaths and must therefore be disqualified from Legco.

The judge also ordered the pair from Youngspiration party not to carry out any activities in the capacity of a legislator.

The two politicians from the Youngspiration party had used words insulting to China and displayed a banner that read “Hong Kong Is Not China”.

They also pronounced China as "Cheena" in the swearing-in oath, which was deemed demeaning to China.

Ms Yau  told reporters outside the court on Tuesday afternoon that the outcome of the judgment was "expected".

"My assistants and I have already been banned from entering the Legco building. I just want to reiterate that me and Leung Chung Hang were elected by 20,643 and 37,997 voters in the September Legislative elections. If the court chooses to use such a method to strike us off, people can see what kind of society we live in," said Ms Yau.

The pair had initially planned to hold a press conference at a meeting room in Legco building in the evening, but following the judgement to ban them from Legco, the location has to be changed.

Legco President Andrew Leung who was listed as the third defendant in the case, had ruled the oaths of the pair invalid, preventing them from taking office. 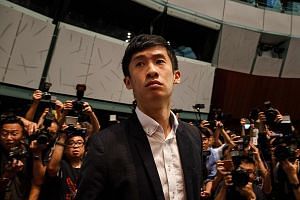 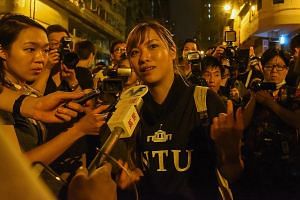 From awkward nerd to loud and brash politician

Although he scheduled another session for the pair to be sworn in, he changed his decision on the eve of the session and barred the two from the legislature.

But in his judgement, Justice Au said that although Mr Andrew Leung and Legco secretariat could administer the oath-taking of lawmakers, the final decision on whether an oath is valid, lies with the court in the event that the validity of the oath is being disputed.

Chief Executive Leung Chun Ying had mounted the unprecedented legal move against the two lawmakers. He argued in court on Nov 3 that the two politicians had declined to take the oath and should be disqualified.

Before the judgement was released, the Chief Executive had said that the government would follow up in accordance with the law, but stopped short to say if he would seek to disqualify the oaths of other lawmakers who were sworn-in despite altering their oaths.

At least 15 lawmakers are having their oaths challenged after some pro-Beijing activists and residents filed complaints with the court.

Ahead of the High Court ruling on Tuesday, China's National People's Congress (NPC), or Parliament, issued an interpretation of Hong Kong's Basic Law on Nov 7 in relation to the case. It said the actions of the two lawmakers are deemed to have contravened the legal requirements for public office.

"Those who declare Hong Kong independence not only have no right to run for the legislature and be a lawmaker, they should also be subject to legal responsibilities," said the NPC in an eight-page document detailing its interpretation of Article 104 of the Basic Law.

The interpretation, seen by many Hong Kongers as political intervention by Beijing to remove the two lawmakers from Legco,  set off large street protests in Hong Kong.

There are concerns now that more pro-democracy lawmakers could be removed from the Legco due to their improper oath-taking.