Business confidence in the territory continues to be pummelled as violent protests took place for the eighth straight weekend.

In a statement on Monday, the American Chamber of Commerce (AmCham) in Hong Kong said its members were already reporting "serious consequences" from the disruption caused by weeks of mass demonstrations, varying from an immediate hit to revenue caused by disruption to supply chains and consumption, to longer-term doubts over cancelled events and shelved investments.

In a straw poll conducted last week, 38 per cent of the 147 AmCham respondents said they were pessimistic over the short term, but confident that Hong Kong would bounce back.

Some 33 per cent believed that the city's long-term prospects had been irreparably damaged, while 12 per cent said they were optimistic about short-term difficulties being resolved. The remaining number in the survey either felt the same as before or did not agree with any of the options.

Respondents also reported a deepening perception within their companies and among overseas customers that Hong Kong had become less safe and a riskier place for business, AmCham said, adding that members believed the primary beneficiary of Hong Kong's decline would be Singapore.

In a sign of growing concerns about safety and increasing anti-China sentiment in the city, the tourism and retail sectors are feeling the squeeze.

The Hong Kong Retail Management Association (HKRMA) said on July 16 that a majority of its member companies reported a "single-to double-digit" drop in sales value for the month of June and in the first week of July.

July and August are the peak business seasons for retailers, but many are expecting a double-digit drop in business in the next few months as the protests spread.

In the light of the unrest, HKRMA has adjusted its original forecast of the city's total retail sales value from single-digit growth to double-digit drop for the whole of this year. 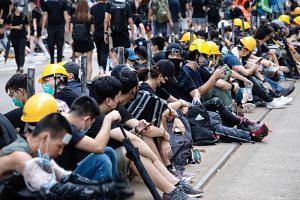 From Pizza Hut to Yoshinoya, brands are caught in the middle of Hong Kong protests

"The consumption sector is going to weaken, which will put pressure on the job market of the retail sector, which in turn will further dampen consumption," she said.

Tourism, which is a big main-stay for the retail sector, has also been hit with travel advisories being issued by several countries following the unrest.

Singaporean Wu Lizhuang, 36, was originally planning a shopping and dining trip to Hong Kong at the end of the year but decided recently to pull the plug.

Ms Wu, who works as a producer, said she did so especially after the Singapore Ministry of Foreign Affairs issued a travel advisory.

"Safety is a concern because attacks can even happen at the train station, so there is a worry that clashes can take place anywhere," she said, referring to the incident at Yuen Long train station more than a week ago when masked men attacked protesters and passengers.

The unprecedented protests, which were triggered by Chief Executive Carrie Lam's push to amend an existing extradition law, have spilled over to the city's relatively resilient financial market.

"The ongoing protests have started to erode investor confidence about the city's future, in particular the real estate, luxury retail, tourism and even public transportation sector," she said.