Tsang, 72, faced three charges of misconduct and bribery pertaining to the period when he was chief executive for seven years, from 2005.

Each charge carries a jail sentence of up to seven years.

The case is set to send shockwaves through a city that has earned a reputation as one of the world's most open and transparent markets.

Wearing his customary suit and bow tie, a sombre-looking Tsang arrived hand in hand with his wife at the city's High Court more than an hour before the hearing was scheduled to begin yesterday morning. 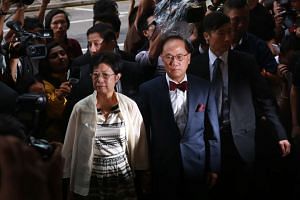 He is accused of failing to disclose his plans to lease a luxury penthouse in neighbouring Shenzhen from a major investor in a broadcaster which was then seeking a licence from the Hong Kong government. Tsang allegedly approved the company's application for the licence.

He also failed to declare that an architect he proposed for a government award had been employed as an interior designer on the flat.

The hearing is expected to last 20 days.

In 2012, Tsang apologised for separate allegations that he accepted inappropriate gifts from business friends in the form of trips on luxury yachts and private jets.

The trial comes at a time when residents are losing faith in Hong Kong's leaders as a series of corruption cases fuel public suspicions over cosy links between the authorities and business leaders.

Critics blame the city's method of electing its leader - who is selected by a 1,200-strong electoral committee made up of representatives of special interest groups weighted towards Beijing.

"It is very dangerous and very difficult to remain independent from those... groups," said Mr Lam, a former investigator for the Inde- pendent Commission Against Corruption, the city's anti-graft agency.

"Tsang's case is just the tip of the iceberg," he added.

Experts say the case sends a message that the judiciary is not afraid to go after high-ranking officials.

"It (Tsang's case) sets a precedent because the current chief executive is also involved in allegations of corruption," said political expert Ma Ngok of the Chinese University of Hong Kong.

"That would create a public expectation that a case may be launched against Leung when he finishes his term."

In 2014, Tsang's deputy, Rafael Hui, was jailed for 71/2 years after being found guilty of taking bribes from Hong Kong property tycoon Thomas Kwok.

The son of a police officer, Tsang enjoyed a high-flying career, rising through the ranks in the civil service to serve as colonial Hong Kong's first ethnic Chinese financial secretary just before the city's handover from British to Chinese rule in 1997.

He was knighted that same year.