HONG KONG • Hong Kong is facing its first recession since the 2008 global financial crisis, with little prospect of an immediate recovery as the city confronts its most violent protests in decades.

Businesses in tourist hubs are closing early or seeing fewer customers. Even when things are open, stores and the airport are quiet, as tourists stay away.

The city's subway network was closed entirely for long stretches during the holiday weekend from Oct 4 amid the violent backlash to Chief Executive Carrie Lam's attempt to quell months of protests by invoking an emergency law.

The economy in Hong Kong contracted in the second quarter, almost certainly in the third quarter, and the data is still deteriorating.

The question is how deep and prolonged the pain will be.

Once Asia's manufacturing powerhouse before the rise of China, Hong Kong's freewheeling consumer and finance-led economy is highly vulnerable to a collapse in confidence that has been delivered by the turmoil.

The city's government has struggled to make the case that it has the policy tools to arrest the slide while the unrest continues.

Said Mr Dong Chen, senior Asia economist with Pictet Wealth Management: "I do not expect to see any strong measures that can instantaneously turn things around. The best scenario is after this political unrest, they can come up with longer-term planning or measures to solve structural problems."

The effects of the US-China trade war also raise the prospect of a contraction for the full year. 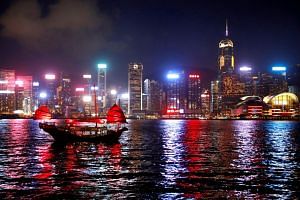 As wealthy flee Hong Kong, they bypass US to find other havens

The downturn has been rapid, as declining exports and protests have erased any economic momentum from the start of this year.

When Financial Secretary Paul Chan unveiled his budget in February, he forecast annual growth of 2 per cent to 3 per cent. By August, he had slashed that forecast to zero to 1 per cent.

Many economists see growth for all of this year sliding well below 1 per cent - JPMorgan Chase & Co's latest call is 0.3 per cent - for the weakest reading since 2009.

The downturn has also taken its toll on Hong Kong's equity market.

The MSCI Hong Kong Index has slumped 18 per cent from an April high, with real estate and consumer stocks leading declines in that time.

A variety of key economic indicators have rapidly turned south: Retail sales by value plunged a record 23 per cent in August from a year earlier as demand for luxury goods such as jewellery and watches fell.

Tourist arrivals declined almost 40 per cent in August from a year earlier to about 3.6 million visitors, the worst performance since the 2003 Sars epidemic, data from the Hong Kong Tourism Board showed.

Exports are expected to shrink this year to the worst level in a decade, the Hong Kong Trade Development Council warned as it slashed its 2019 growth forecasts.

Hong Kong has had severe economic challenges before. In the early 2000s, the Sars epidemic shut down the city. But once the all-clear came, visitor arrivals and business confidence bounced back.

The difference now is that there is little expectation of a rapid resolution, as positions harden on either side of the barricades.

Bloomberg economist Qian Wan said: "In the short term, we see the economy falling into a recession as growth pillars, including trade, tourism and finance, are all under stress. The more significant risk, though, would be the city losing its reputation as a global business and financial centre, which significantly undercuts long-term growth prospects."

A version of this article appeared in the print edition of The Straits Times on October 11, 2019, with the headline 'HK sinking into recession with no recovery in sight'. Subscribe
Topics:
More
Whatsapp Linkedin FB Messenger Telegram Reddit WeChat Pinterest Print Copy permalink