HONG KONG • Lawmakers, diplomats and experts in China and abroad have warned about fresh signs of a so-called colour revolution in Hong Kong, as some protesters and rally organisers increasingly resort to violent actions in an attempt to shake the pillars of public services, add rifts to the community and discredit the authorities.

Such actions in the past three months, which have fuelled unrest and dampened Hong Kong's economic prospects, have been well staged, mostly following typical patterns of anti-government movements, and some have been supported by agencies abroad, they said.

In the past month, radical protesters have ratcheted up the tension by hurling petrol bombs at police in street clashes, harassing public servants' family members, disrupting the light-rail airport express, and encouraging high school and university students to boycott classes, according to media reports.

Such movements generally adopt a specific colour or flower as their symbol, hence the name colour revolution. In the case of the Hong Kong protests, the demonstrators are clad in black.

Many of these features align with what has happened in Hong Kong this year as well as in the Occupy Central movement in 2014, Professor Zhang said.

The "civil disobedience" concept and slogan, as chanted frequently by violent protesters and leaders, aim to defy China's Constitution and is part of an effort to deceive ordinary residents, he added.

Activists set up projectors and screens in Hong Kong streets recently and showed Winter On Fire - a documentary endorsing demonstrations in Ukraine in 2013 - saying they wanted to inspire protests in Hong Kong, BBC reported.

In addition, some activists have unveiled a plan through social media to disturb and paralyse department stores this weekend, local media reported. 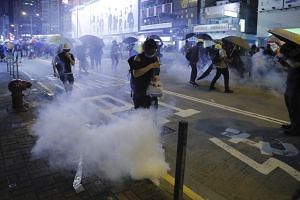 China steps up charges of US interference and collusion

Mr Yang Guang, spokesman for the State Council's Hong Kong and Macau Affairs Office, told reporters last Tuesday there have been "clear features of a colour revolution" among the radical activists in Hong Kong, and their goal is to paralyse the territory's government, seize the power for governing the Special Administrative Region and make "one country, two systems" an empty concept.

Ms Carla Stea, a geopolitical analyst at Global Research, the website of a Canada-based think-tank, warned that "the US and European mainstream media and various government and quasi-government entities are supporting destabilisation of the government in Hong Kong". In an article published last Monday, she alleged that foreign agent provocateurs have attempted to provoke the government to overreact, "which could then be used to discredit it".

Senior researcher Xing Guangcheng of the Chinese Academy of Social Sciences said past turmoil in Eastern European countries showed a colour revolution is "never a real positive revolution", as it eyes overturning the government, seeks power transfer and serves other countries' interests.

Mr Xing said the typical pattern of countries such as the United States that advance colour revolutions include supporting non-governmental organisations, cultivating the opposition and their leaders, fuelling public fury through stunts and scandals, defying election results and supporting efforts to seize power.

What have usually followed such colour revolutions are long-term political and social instability and a sluggish economy, and many of those among the opposition who have seized power also stepped down amid unrest, Mr Xing said.