Police said last night that they have charged 44 protesters with rioting after a violent demonstration on Hong Kong Island on Sunday, in which riot police were attacked with bricks and sharpened iron rods.

The decision enraged demon-strators who were already gathered outside the police station holding the arrested protesters.

About 100 demonstrators clashed outside the Kwai Chung Police Station with riot police, who used pepper spray and batons to try to disperse them.

Charging the protesters with rioting ratchets up the pressure to end two months of increasingly violent and disruptive demonstrations that have driven away tourists, hurt the economy and angered Beijing.

These are the first activists to face one of the territory's most serious public order offences since the demonstrations escalated last month. Rioting carries a jail term of up to 10 years.

A 24-year-old man was also charged with possession of offensive weapons during the protest in the western part of the island on Sunday night, where police had to use tear gas and rubber bullets to disperse the crowd.

All 45 of them will appear in the Eastern Magistrates' Courts today, the police said in a statement. 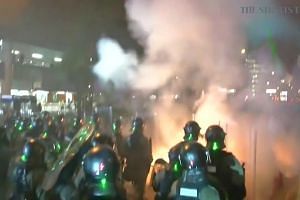 Hong Kong triads in the spotlight after Yuen Long attack: Who are they?

Activists have kept up the pressure on the Hong Kong government, saying Chief Executive Carrie Lam has failed to meet their demands.

The protests were triggered by Mrs Lam's push to amend an existing extradition law, but have since morphed into anger over loss of freedoms, perceived meddling by China and demands for greater democratic reforms.

Yesterday, protesters disrupted railway services on key lines, leaving tens of thousands of commuters stuck in stations after dozens of protesters tried to prevent trains from leaving platforms, before a smaller group extended their demonstrations to the airport later in the day.

A few dozen protesters had used their hands and bodies to prevent trains from leaving Tiu Keng Leng Station in Tseung Kwan O shortly before 8am, to the annoyance of many passengers.

The number swelled to about 100 protesters later, as they moved to North Point Station on the Island Line and Hung Hom Station on the West Rail Line. At least one train service was held up for an hour.

Tempers flared at the affected stations and the police were called, but no arrests were made.

Ms Katie Leung, 42, who works in publishing, told The Straits Times: "I knew they were gathering, but I was hoping it wouldn't escalate too much. In the end... I had to take a bus to work instead and was nearly two hours late.

"You really shouldn't inconvenience people trying to get to work. We want to support the cause as much as possible, but this is very disruptive."

"It is quite inconvenient, but when the government isn't lis-tening to the people, this is what we are forced to do. I told my boss I would be late for work," said the 25-year-old who works in an insurance company.

A similar campaign was carried out last Wednesday at Admiralty Station, also during the morning rush hour, causing train delays of as long as 18 minutes.

Later yesterday, dozens of mostly young protesters gathered at the arrival hall of Hong Kong's busy airport to spread their message to foreigners visiting the city.

They pasted signs on their backs, with protest slogans and graphics explaining the recent police violence, in a more muted repeat of last Friday's sit-in.

Student Shirley Luk, 17, was acting as a walking Lennon Wall, a mobile version of the ubiquitous Post-it walls that have sprouted up across Hong Kong, where people put up messages of support written on sticky notes.

"We felt that since the government has not responded after so long, we will just come out to tell visitors about what is happening in Hong Kong," she said.