Lam won't rule out China's help over violence in unrest, but says HK should handle it for now

The violence in Hong Kong has reached a state of lawlessness and the "rioters" are destroying the city, leader Carrie Lam said yesterday, adding that she will not rule out accepting help from mainland China in tackling the increasingly violent pro-democracy protests.

Still, she insisted that Hong Kong is equipped to handle the current situation on its own as the city braces itself for further demonstrations throughout the week.

Since a ban on the wearing of masks was announced last Friday, thousands have taken to the streets in protest, sometimes with acts of violence targeting metro stations, Chinese banks and Chinese-linked businesses.

"When rioters destroy malls and MTR stations, they call them dead things. But what they are doing is destroying Hong Kong," said the Chief Executive at a press conference ahead of the Executive Council meeting.

"These are all illegal acts that have sent Hong Kong into a very dangerous state. (The rioters) have no bottom line and are completely lawless."

But the events of the past few days are not a sign the ban is unsuccessful, she said, asking for time for the law to take effect.

Other than helping with law enforcement, she said the ban is meant to deter those who may feel emboldened by anonymity to break the law.

Mrs Lam had invoked an emergency legislation to order the mask ban.

But she denied any plans to use the emergency ordinance any further at this point. 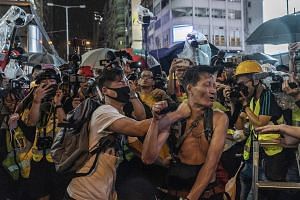 On Monday evening, protesters took to the streets across the city for the fourth consecutive night in areas such as Mong Kok, Yuen Long, Tseung Kwan O and Sha Tin, where they marched for the right to wear a mask in public.

Groups of protesters trashed closed MTR stations around Sha Tin and targeted Chinese-owned businesses in a nearby shopping mall, while others started fires and surrounded police stations.

Since Saturday, 77 people have been arrested for violating the mask ban, police said yesterday.

Separately, Legislative Council president Andrew Leung said it cost HK$40 million (S$7 million) to fix the damage to the LegCo building after protesters stormed and trashed it on July 1, vandalising the legislative chamber.

The LegCo will reconvene on Oct 16, when Mrs Lam is also set to deliver a policy address.

Yesterday, as schools and offices reopened after a public holiday weekend, rail operator MTR Corporation restarted operations at most of its 93-station network, but said it would shut earlier at 8pm to facilitate repair works.

Most of these are in the New Territories and had been targeted on Monday night, when protesters prised open shutters, then took metal bars and hammers to ticketing machines, turnstiles and even closed-circuit television cameras.

Long queues could be seen at bus stations early yesterday morning for the MTR's free connecting buses, with many among them students in uniform and office workers, local TV footage showed.

Hong Kong has been rocked by nearly four months of unrest, with close to a million protesters earlier taking to the streets against a contentious extradition Bill.

While the Bill has been withdrawn, the protests have morphed into an anti-government movement calling for more democracy.

Beijing has repeatedly accused "foreign forces" of driving the protests, which it calls a "colour revolution", saying that the unrest cannot go on indefinitely.

An item in Hong Kong's mini Constitution, the Basic Law, allows it to call on Beijing's intervention should the local government deem itself unable to manage the city any longer.

The People's Liberation Army maintains a garrison in the city but generally keeps a low profile.