Police and protesters clashed at several locations across Hong Kong yesterday as peaceful rallies once again escalated, drawing condemnation from the government, which also warned against a planned general strike today.

The city has been mired in its biggest political crisis since its handover from British rule in 1997, with nine consecutive weekends of protests and civil disobedience, which have resulted in increasingly violent battles with the police.

What initially started as protests against a contentious extradition Bill - which has since been suspended - has evolved into an outpouring of fury against the local authorities and a call for political reform.

The group had surrounded a police station following a peaceful march, then pelted it with rocks and eggs.

As riot police appeared, firing several rounds of tear gas, the crowd moved to the expat-friendly neighbourhood of Kennedy Town where there was another planned rally. The area is near Beijing's liaison office in the city and had been the scene of street battles over the previous two weekends.

Protesters once again spilled out of the park where the approved rally was under way, occupying main arterial roads and flyovers, and shouting protest slogans including "Hong Kong ga yau", or "come on, Hong Kong" in Cantonese, and "Monday, strike!"

After another stand-off with more tear gas fired, protesters regrouped in Causeway Bay, a popular shopping district, forcing shops in the area to shut early.

As protesters barricaded almost 2km of the main road with metal fences, tape and even clingfilm, some also blocked traffic at the nearby Cross Harbour Tunnel, the main passage linking Hong Kong Island to the Kowloon peninsula, causing traffic to back up for kilometres. 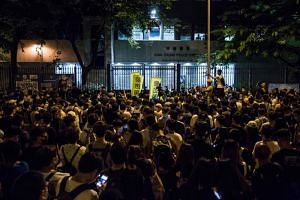 Some moved towards Bauhinia Square, where official ceremonies are held, and vandalised the giant statue of a golden Bauhinia blakeana, Hong Kong's national flower.

In a bid to slow the police's advance, a small group torched rubbish bins and wooden panels on a side street as officers in riot gear closed in, rapidly volleying multiple rounds of tear gas. Within half an hour, the group dispersed with plans to regroup at several locations on the Kowloon peninsula, including Wong Tai Sin, the site of a tense stand-off between police and residents on Saturday night.

Upset with the use of tear gas to disperse protesters surrounding a police station, many living in the area had flung objects, including umbrellas and glass bottles, at officers, later laying siege to quarters for disciplined service officers.

Yesterday's events, which continued late into the night, were a physical manifestation of the movement's mantra, "be water" - an approximation of a Bruce Lee quote, referring to being fluid and flexible.

In a statement last night, the region's government slammed the actions as having gone far beyond "peaceful and rational", warning that it could lead Hong Kong into "a very dangerous situation".

The government also called on Hong Kongers to not take part in strikes today, saying the economy has already been hurt by domestic issues and geopolitical events.

"Any large-scale strikes and acts of violence will affect the livelihood and economic activities of Hong Kong citizens," the statement said.

Today's strike is set to target the airport, buses and trains in the financial hub.

Yesterday's rallies followed violent clashes in Mongkok, Tsim Sha Tsui and Wong Tai Sin the previous night, when more than 20 arrests were made for offences including unlawful assembly and assault.

On Saturday, tens of thousands deviated from an approved protest route in Mongkok and spilled onto Nathan Road, the main thoroughfare running through several districts on the Kowloon peninsula popular with tourists.

Protesters were locked in a stand-off with police after surrounding police stations in Tsim Sha Tsui and Mongkok, vandalising station exteriors, and lobbing rocks and flaming objects at them.

They had also briefly occupied the Cross Harbour Tunnel, a key passage running under Victoria Harbour connecting Kowloon to Hong Kong Island. After police fired tear gas and pepper spray to disperse the crowd, some protesters hurled petrol bombs, bricks, glass bottles and miscellaneous objects at officers, the police said in a statement.

A version of this article appeared in the print edition of The Straits Times on August 05, 2019, with the headline 'HK govt slams clashes as protesters fan out to many areas'. Subscribe
Topics:
More
Whatsapp Linkedin FB Messenger Telegram Reddit WeChat Pinterest Print Purchase Article Copy permalink