Critics say problem is not lack of housing but affordability

Hong Kong will have to build a million flats by 2046 to accommodate its growing population which will peak at 8.22 million in 2043, a government study has shown.

The population projection-based report that envisions "a more liveable place with larger flats and more public space" also projects larger private flats with an average size of 646 sq ft, up from 620 sq ft. Public housing will remain at an average size of 431 sq ft, smaller than a three-room Housing Board flat in Singapore.

The study was released by the government last month to get feedback from the public on its development strategy for the city called "Hong Kong 2030 Plus: Towards a Planning Vision and Strategy Transcending 2030".

Secretary for Development Paul Chan said Hong Kong 2030 Plus is a vision-driven plan to shape the built environment of the city beyond 2030. It is the first time in its housing needs study that the government has specified the target date of 2046, a year before the end of China's promise to keep Hong Kong's way of life unchanged for 50 years from 1997, when the city returned to the Chinese fold from British rule.

The study has drawn criticism from some lawmakers, who said the government's vision to build a million flats by 2046 is "unrealistic". 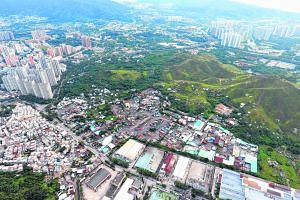 "The government is being too optimistic to estimate a population of 8.22 million by 2043. Hong Kong continues to face low birth rates and an ageing population, we will not need a million flats," said Democratic Party lawmaker Andrew Wan.

Noting that the problem is not a shortage of housing, he said: "The real issue is affordability. Hong Kong is not short of flats. There are plenty of empty flats which are not affordable to most people. In Hong Kong, many people buy flats for investments and such activities drive up the prices of flats."

Lawmaker Edward Yiu, who represents the Architectural, Surveying, Planning and Landscape functional constituency, said with the shrinking population, the city would need just half a million new flats.

Government data shows only half of Hong Kong's population owns a home, compared with 90 per cent in Singapore.

Earlier this month, in a move to cool the overheated market which saw median home prices rising for the sixth consecutive month in September, the government raised the stamp duty to 15 per cent for second-home buyers.

But three days after the curb, an 8,702 sq ft flat in the exclusive Peak neighbourhood was sold for HK$912 million (S$167 million), with the price per square foot exceeding the previous record at the same development by 23 per cent, reported Bloomberg.

Hong Kong's property boom has resulted in an increase in household debts, revealed a Legislative Council survey this week.

It showed that the average debt borne by each household almost doubled to HK$646,100 from 2005 to last year. It cited surging flat prices and rentals, which rose by 223 per cent and 100 per cent respectively within the decade, as a reason for people taking out larger loans.

Critics also questioned the government's plan to reclaim land to increase land supply, when there are vast tracts of undeveloped land in the New Territories.

In its plan, the government is proposing to build two major new towns in the north of the New Territories and on reclaimed land east of Lantau Island, which it said could provide 1,720ha of land to meet a projected shortfall of 1,200ha for housing and economic development.