BEIJING • China's navy has launched a new electronic reconnaissance ship, the latest addition to an expanding fleet which comes as Beijing's new assertiveness to territorial claims in the South China Sea fuels tensions.

The People's Liberation Army (PLA) now operates six electronic reconnaissance vessels, the China Daily newspaper said, noting that the PLA "has never made public so many details about its intelligence collection ships".

China has also said it is building a second aircraft carrier. China's only carrier is the second-hand, Soviet-built Liaoning, which this week unsettled neighbours with drills in the disputed South China Sea. It also sailed through the Taiwan Strait this week.

The new electronic reconnaissance ship, the CNS Kaiyangxing or Mizar, was delivered on Tuesday to a combat support flotilla of the North Sea Fleet at the eastern port of Qingdao. 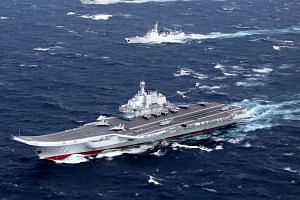 "The Kaiyangxing is capable of conducting all-weather, round- the-clock reconnaissance on multiple and different targets," the China Daily reported, citing Chinese defence media as comparing it to sophisticated vessels produced only by countries with advanced militaries such as the United States and Russia.