Many have come to take the shinkansen for granted, with the bullet train network now stretching 3,000km and transporting 400 million passengers a year.

"In those days, Japan was not a wealthy country by any stretch," Mr Abe said in a video message on Thursday to the third biannual International High-Speed Rail Association forum held in Fukuoka on the south-western island of Kyushu.

"But the development of the shinkansen which linked the two major cities of Tokyo and Osaka at 210kmh truly inspired the Japanese people and gave us hope for the future," he said.

That cut travel time between Japan's two largest cities, located 552km apart, from 6hours 50minutes to 4 hours. Faster trains have since been built for what is now the world's busiest train route, with the Nozomi service joining both cities in 2hours 22minutes.

These days, Japan is setting its sights on building a new superconducting maglev service with a top speed of 500kmh, which connects Tokyo to Nagoya in central Japan and is due to start in 2027. The service will be extended to Osaka by the mid-2030s, slashing travel time to just 1hour 7min.

While Japan's bullet train system has been eclipsed by China's high-speed rail network of more than 25,000km, it is the world's first high-speed rail service and continues to be regarded as a technological marvel for its track record.

There have been no deaths in its 54 years of service, thanks to its automatic train control technology, while in China, 40 people were killed when two high-speed trains collided in 2011. The shinkansen has had an average delay of less than one minute, even accounting for delays due to natural disasters. 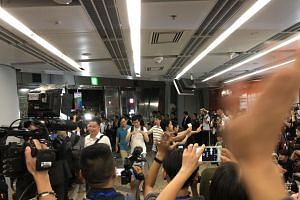 The shinkansen was, in fact, built amid massive protests from detractors who were against what they saw as wantonly wasteful spending at a time when Japan was still rebuilding from World War II.

Many, not just in Japan but worldwide, had been dismissive of the idea of a bullet train as they felt the future of transport to be in automobiles and aviation, and that the age of the railway was over, Imperial College London transport expert Roderick Smith told a panel.

But the shinkansen, which was built in just five years, would cause ripples worldwide.

Mr Abe said many regions around the world today continue to be interested in high-speed rail given its potential to bring about major social change.

He told the forum of his hopes for the high-speed rail service in India, which taps Japanese shinkansen technology and will connect Mumbai and Ahmedabad, 530km apart, from Aug 15, 2022.

"We look forward to the shinkansen crossing the seas and also beginning to speed across the Indian continent," he said.

"There are many firsts in the India-Japan story, both politically and economically," he said, adding this made Japan the natural choice to partner for the shinkansen project.

And it is an open secret that both countries were keen on the Singapore-Kuala Lumpur high-speed rail project, which has been suspended.

The three-day International High-Speed Rail Association event started on Wednesday, gathering 331 participants from 16 territories including Singapore, Malaysia and the United States. But China was conspicuously missing from what was billed as a "global" forum.

Asked about China's absence by The Straits Times, International High-Speed Rail Association chairman Masafumi Shukuri said: "When it comes to China, they have adopted and developed a system that is very different from Japan's, and are obviously looking to expand overseas and are very proactive about this. As far as the objective of our activities go, they do not gel with China's."

Correction note: An earlier version of the story wrongly said that the travel time between Tokyo and Osaka will be slashed to 1hour 17min with the launch of the new superconducting maglev service. It should be 1hour 7min. We are sorry for the error.