Countries around the world should collaborate to develop technologies to solve the many challenges they face, Deputy Prime Minister Heng Swee Keat said yesterday morning as he kicked off a forum on innovation.

With China, Singapore hopes to explore opportunities for cooperation through bilateral platforms such as the Joint Council for Bilateral Cooperation, and the new Singapore-Shanghai Comprehensive Cooperation Council (SSCCC), said Mr Heng, who co-chairs both of them.

"We can and must explore opportunities to collaborate with scientists and innovators around the world, many of whom are here today," he said in a keynote address at the Pujiang Innovation Forum in Shanghai.

Only by working together can countries solve problems such as food security and the rising incidence of cancer, he added.

Taking concrete steps to boost such collaboration was one of the three key thrusts in Singapore's approach to harnessing the opportunities being offered by technology, said Mr Heng, who is also head of the National Research Foundation.

The other two related to addressing issues of critical importance to society and taking a holistic approach to fostering innovation.

For instance, the Republic has addressed critical issues such as its water security by developing desalination plants and water recycling technologies.

"Innovation is not just about coming up with the most number of patents, the most complicated formula or the most complex device... Our aim is to enable people to lead better lives," he said.

Mr Heng said a holistic approach to fostering innovation meant having a governance structure that protected research integrity and intellectual property rights, training and ensuring that people had the right skills, as well as investing in research and development. 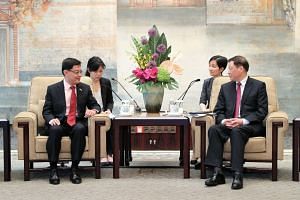 Potential for cooperation between Singapore and Shanghai is huge: DPM Heng Swee Keat

He noted that Singapore's public and private spending on research and development amounted to about 2 per cent of its gross domestic product, similar to those for China and Organisation for Economic Cooperation and Development nations.

He also said rapid advancements in technology made by China and the rest of Asia meant that the region was no longer just a passive recipient of technological innovations elsewhere.

"Asia is now seeking to play a key role in the Fourth Industrial Revolution," he added.

Mr Heng, in his speech, noted that technology was also giving rise to new challenges. These included the disruptions that were causing geopolitical tensions, the fraying of social fabrics because of displaced jobs, widening inequality and "echo chambers enabled by social media".

Trust was also being strained largely because of the "speed with which fake news can be spread and digital anonymity", he said.

Countries needed to work together to solve these problems, Mr Heng added.

Yesterday's opening ceremony featured speakers such as Shanghai party secretary Li Qiang and Chinese Minister of Science and Technology Wang Zhigang, both of whom said China was looking to innovation to power its growth.

For Shanghai, enhancing innovation would be a "powerful engine" for growth, said Mr Li.

"Looking into the future, we resolve to pursue distinctively Chinese innovation... we want to build Shanghai into an important place that enables global new ideas, new science discoveries and new industrial directions," he added.

First held in 2008, the annual forum aims to boost cooperation in science and technology between China and other countries.

Organised by the Ministry of Science and Technology and the Shanghai government, a foreign country is designated the country of honour each year, with its delegation of government agencies and businesses taking part in discussions.

Singapore is this year's country of honour; previous honourees include Portugal, Britain and Israel.

Mr Heng is halfway through an eight-day visit to China. He will travel to Guangzhou in southern Guangdong province today.

A version of this article appeared in the print edition of The Sunday Times on May 26, 2019, with the headline 'Heng urges govts to collaborate in tech to solve problems'. Subscribe
Topics:
More
Whatsapp Linkedin FB Messenger Telegram Reddit WeChat Pinterest Print Purchase Article Copy permalink