It was the 10th anniversary of Hong Kong's return to China, a key event for both Beijing and the former British colony.

At that time, she was a performer at an anniversary concert, singing Hong Kong's Night With Moonlight, reported South China Morning Post (SCMP).

"People say blood is thicker than water, we treasure the sweetness of being together," the song went. "We praise the full moon in Hong Kong."

At the end of the concert, she was joined by then President Hu Jintao and others on stage to sing Ode To The Motherland. 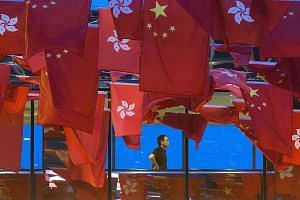 All decked out for HK's 20th anniversary 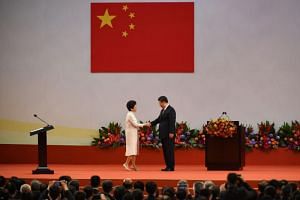 She and China's other famous singers such as Song Zuying and Yan Weiwen performed at a gala show at the Hong Kong Coliseum.

She sang the famous tune My Motherland about a Chinese soldier fighting for his country and missing his home and family.

Ms Peng joined the People's Liberation Army in 1980 as wen yi bing, or an "entertainment soldier", and made her name in the music scene, making frequent appearances on state television to sing patriotic songs

This year, Ms Peng will again participate in the handover anniversary celebrations, but in a different role - as China's First Lady.

Dressed in a high-collared striped jacket with matching knee-length skirt, Ms Peng arrived in Hong Kong yesterday, accompanying her husband on his first trip to Hong Kong since he became president in 2003.

The couple will be attending a variety show this evening at the Hong Kong Convention and Exhibition Centre.

She will also be meeting residents of an old folk's home today.