China's ambitious Greater Bay Area innovation cluster will be a key driver of the country's economic growth and will attract talent from not just the region but also around the world, say the three top officials of Guangdong, Hong Kong and Macau.

Incentives such as tax breaks, subsidies and talent immigration schemes have been announced in a bid to create a high-tech city cluster that will rival the innovative bay areas of San Francisco, New York and Tokyo.

Coupled with the agreeable climate of China's south and a world-class transport network, the new innovation hub will be a magnet for talent, said Guangdong Governor Ma Xingrui at the China Development Forum yesterday.

"I believe we're in a better position to grow," he said in relation to the other bay areas, after offering a list of numbers, including gross domestic product last year which exceeded US$1.6 trillion (S$2.2 trillion).

Designed to push China's economy forward by taking it on the path of innovation and high-tech development, the Greater Bay Area is President Xi Jinping's brainchild and consequently enjoys unprecedented support from the central government.

The authorities unveiled a vague 11-chapter blueprint last month, with few details on development plans to link up nine cities in Guangdong province with the special administrative regions of Hong Kong and Macau, while sticking to the "one country, two systems" principle.

Yesterday, the three leaders tried to paint a rosy picture of the economic plan's future to an audience of top global chief executive officers and academics at the high-level annual forum, promising opportunities for foreign investments and vowing to ease the way for companies. 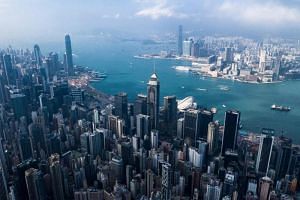 "The Greater Bay Area has the potential to become not only the Silicon Valley of the East, but also Silicon Valley and Wall Street within the same city cluster," she said.

Macau Chief Executive Chui Sai On said that while his territory's role as a centre for tourism and recreation and as a platform for promoting cooperation between China and Portuguese-speaking countries is clear, leaders have to be "pragmatic" to ensure the economy's long-term stability.

All three chiefs acknowledged that while the physical infrastructure - such as bridges and a high-speed rail system - is all in place, China still has a way to go to develop the "soft conditions", mainly in harmonising three different tax, legal and other systems, including China's newly passed foreign investment law.

Guangdong's Mr Ma said: "The rules, the processes, the soft power. We have a big gap to close. And it's a long journey." He added that the authorities will improve intellectual property protection and streamline government services to attract foreign firms.

China's Industry and Information Technology Minister Miao Wei made the same promise at an earlier session, saying the government will take a hands-off approach and let the market lead.

"We will place companies as the main actors. We will reduce micro interventions by the government so that the market can decide on resource allocation."