Speaking moments after United States President Donald Trump told the same audience the US would not seek multilateral trade deals and wanted to make the system fairer for Americans, Xi painted a picture of a global order that would bring collective benefits.

“The concept of globalisation should pay more attention to openness and tolerance, while the direction should focus on balance,” Xi told executives at the Asia-Pacific Economic Cooperation forum in Danang, Vietnam. China will “continue to build an open economy and work hard to achieve mutual benefits,” he added.

Xi conceded that the philosophy behind free trade needed to be repurposed to be “more open, more balanced, more equitable and more beneficial to all” but defended multinational trade deals, which he said helped poorer nations benefit from global commerce.

“Opening up will bring progress and those who close down will inevitably lag behind.”

The remarks come after Xi pledged during a state visit to China by Trump to further open the Chinese economy to foreign investors. Following the visit, China announced a plan to open its financial sector by removing ownership limits on its banks and asset-management companies.

The remarks signal a continuation of Xi’s drive to cast himself as a champion of global free trade as the Trump administration challenges China’s barriers to access for foreign companies. 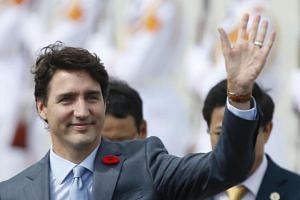 Earlier this year, Xi launched his pushback against protectionism in a speech to billionaires and government officials gathered at the World Economic Forum in Davos, Switzerland.

The Chinese leader’s comments on Friday contrasted with remarks by Trump, who had spoken on the same stage moments earlier.  Trump gave a spirited airing of his “America First” doctrine, saying Washington would “no longer tolerate” unfair trade, closed markets and intellectual property theft, as he seeks to rewrite the rules of global commerce.

Trump’s withdrawal from the Trans-Pacific Partnership (TPP), a massive trade deal between 12 Pacific nations that excluded China, has been a boon to Beijing.

Xi has stepped into the void, portraying himself as the world’s global free trade leader and pushing its own version of TPP instead.