BEIJING • Roasted as a subversive symbol and chopped from a video streaming website in China, it seems Peppa Pig, the loveable but imperious British cartoon character, faces a bleak future in the communist-led country.

But her popularity has risen unabated, and just months after state media slammed her as an emblem of counterculture, she is playing a starring role as the country ushers in the Year of the Pig tomorrow.

A new film titled Peppa Pig Celebrates Chinese New Year is being released on the first day of the holiday.

The animation, which follows the daily adventures of a bright pink piglet, her brother George and her parents, is hugely popular with Chinese children.

The cartoon's focus on family values has resonated with Chinese parents, said Ms Li Xin as she bought a Peppa toy for her four-year-old at a Beijing store.

Peppa Pig was first broadcast in China in 2015 and the cartoon's shows have since been watched around 60 billion times on the country's largest video streaming sites, said Enders Analysis research analyst Jamie MacEwan. 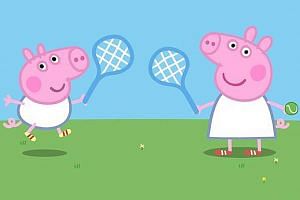 China ushers in Year of the Peppa Pig

Pig-related products fly off shelves in China for CNY

But last May, some 30,000 cartoon clips were removed from a popular video streaming site, following criticism from state media.

"No matter how gangster Peppa Pig becomes, it cannot be allowed to destroy children's youth (or) break rules," an editorial in the People's Daily said last April.

The success of the Peppa brand has also brought other headaches for the cartoon's creators. Copycat merchandise can be easily found in corner stores in Chinese cities.

A spokesman for Entertainment One - the Canadian media company that currently produces the series - told Agence France-Presse that in the past year, more than half a million fake Peppa Pig items were seized and tens of thousands of online sale posts taken down.

A version of this article appeared in the print edition of The Straits Times on February 04, 2019, with the headline ''Gangster' Peppa fights off criticism this Year of the Pig'. Subscribe
Topics:
More
Whatsapp Linkedin FB Messenger Telegram Reddit WeChat Pinterest Print Purchase Article Copy permalink