Radiation is so strong, it is ruining robots specially built to go in and check on damage

TOKYO • The robots sent in to find highly radioactive fuel in Fukushima's nuclear reactors have been destroyed and a subterranean "ice wall" around the crippled plant - meant to stop groundwater from becoming contaminated - has yet to be finished.

The authorities still do not know how to dispose of the highly radioactive water that is being stored in an ever-increasing number of tanks around the site.

Five years ago, one of the worst earthquakes in history triggered a 10m-high tsunami that crashed into the Fukushima Daiichi nuclear power station, causing multiple meltdowns. Nearly 19,000 people were killed or went missing, and 160,000 people lost their homes and livelihoods. 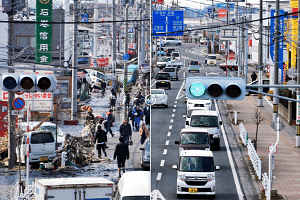 Today, the radiation at the Fukushima plant is still so powerful that it has proven impossible to get into its bowels, and find and remove the extremely dangerous blobs of melted fuel rods.

The plant's operator, Tokyo Electric Power Company (Tepco), has made some progress, such as removing hundreds of spent fuel rods in one damaged building. But the technology needed to establish the location of the melted fuel rods in the other three reactors at the plant has not been developed yet.

"It is extremely difficult to access the inside of the nuclear plant," said Tepco's head of decommissioning Naohiro Masuda, in an interview. "The biggest obstacle is the radiation," he added.

The fuel rods melted through their containment vessels in the reactors, and no one knows exactly where they are now. And this part of the plant is extremely dangerous for humans.

Tepco has been developing robots that can swim underwater and negotiate obstacles in damaged tunnels and piping, to search for melted fuel rods.

But as soon as they get close to the reactors, the radiation destroys their wiring and renders them useless, causing long delays, said Mr Masuda. He added that each robot has to be custom-built for each building, and it takes two years to develop a single-function robot.

Tepco, which was fiercely criticised for its handling of the disaster, said conditions at the Fukushima power station - the site of the worst nuclear disaster since Chernobyl in Ukraine 30 years ago - have improved dramatically. Radiation levels in many places at the site are now as low as those in Tokyo.

More than 8,000 workers are at the plant at any one time.

Traffic is constant as the workers spread across the site, remove debris, build storage tanks, lay piping and work on preparing to dismantle parts of the plant.

Site manager Akira Ono said one big challenge is deciding what to do with the nearly million tonnes of radioactive water.

Mr Ono said he is "deeply worried" the storage tanks will leak radioactive water into the sea, as they have done several times before, drawing strong criticism from the government.

He said he estimates that Tepco has completed around 10 per cent of the work to clear up the site - the decommissioning process could take 30 years to 40 years.

Tepco plans to pump the water into a wall - which looks like the piping behind a refrigerator - to start the freezing process.

The "ice wall" is critical as it helps to keep groundwater from flowing into the basements of the damaged reactors and getting contaminated.

•Go to http://str.sg/ZFPf to slide between photos of devastated areas five years ago and how they look now.

A version of this article appeared in the print edition of The Straits Times on March 11, 2016, with the headline 'Fukushima plant still no place for man or machine'. Subscribe
Topics:
More
Whatsapp Linkedin FB Messenger Telegram Reddit WeChat Pinterest Print Copy permalink