BEIJING (NYTIMES) - On a bitterly cold morning this month, Wang Fuman, eight, set out for school as he usually did, walking nearly 5km through mountains and streams until he reached the warmth of his third-grade classroom.

When Fuman arrived two hours later, his classmates erupted in laughter. The freezing temperatures had covered his hair, eyebrows and eyelashes with frost, making him look like a snowman. His cheeks were chapped and bright red.

Fuman's teacher at the Zhuanshanbao primary school, in the southern province of Yunnan, snapped a photograph and posted it on WeChat, a popular Chinese messaging app.

Soon, the boy became an internet sensation, hailed by commenters as a symbol of the raw determination of rural residents, who make up about 43 per cent of China's population.

The state-run media called him "frost boy" and "ice boy". Some called him a national hero.

"Some people see beauty and hope in his simple and honest face," one newspaper wrote.

"From this little man, foreigners far away will see the great effort and strength of the Chinese nation."

But the photo of Fuman shined a light on the plight of the tens of millions of left-behind children who grow up in impoverished rural areas largely on their own after their parents leave to work in big cities.

Many left-behind children like Fuman live with their grandparents. They face a variety of obstacles, including malnutrition, dilapidated homes and poor access to transportation. Scores of rural schools have been shut in recent years, forcing many children to travel long distances to attend classes. 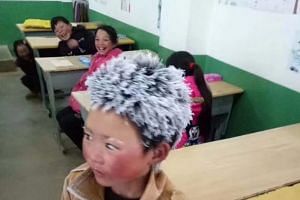 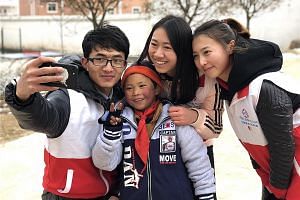 Those difficulties contribute to high dropout rates among rural children, a crisis that is hurting China's ability to train a highly skilled workforce.

President Xi Jinping has vowed to eliminate extreme poverty by 2020, but it will not be easy. While urban areas are growing rapidly richer, many families live in isolated areas cut off from modern roads, schools and hospitals.

Local officials said they would start a programme to provide winter clothes to impoverished children in the region.