TOKYO (AFP) - New volcanic activity on Wednesday (Jan 24) forced Japanese police to suspend search operations a day after an eruption near a popular ski resort that killed a soldier and injured several other people.

A group of 50 police officers and rescue workers had been combing the area beneath Mt Kusatsu Shirane on Wednesday morning, a day after the surprise eruption.

"But we stopped it as volcanic tremors were detected," a Japanese police official told Agence France-Presse.

"We'll discuss with experts to see if we'll resume our operation," he said.

There had not been any reports of missing people after the deadly eruption on Tuesday, which sent rocks and ash tumbling down the snow-covered slope of the volcano towards a ski resort below.

A group of around 80 people who had been stranded at the top of the mountain were rescued during the day on Tuesday.

But police and rescue workers combed the area on Wednesday morning in case anyone had been left behind. 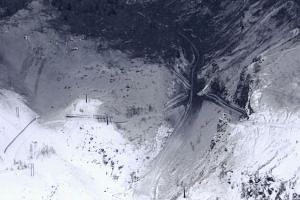 A soldier from Japan's Self-Defense Forces was killed in the incident, and seven others were injured, along with four civilians.

"Their conditions have stabilised. All of them are still in a hospital," he said.

Japan's Meteorological Agency warned on Wednesday that further volcanic activity could be expected.

"Generally speaking, it's rare if an eruptive activity ends with one incident, so we think it will continue for a while," the agency's volcano analyst Kazuya Kokubo said, according to Jiji Press.

The agency is setting up additional monitoring cameras and seismometers around the volcano to better track its activity, a government spokesman said.

Tuesday's eruption of Mt Kusatsu Shirane was its first since 1983, but Japan has scores of active volcanoes and sits on the so-called Pacific "Ring of Fire" where a large proportion of the world's quakes and volcanic eruptions are recorded.

There are currently 111 active volcanoes in Japan, according to agency officials.