US, China slap extra duties on each other's goods, even as talks look set to begin again

Additional tariffs from China and the United States kicked in yesterday as the trade war entered dangerous new territory, with little sign that tensions between the world's two largest economies would cool any time soon.

Washington began levying a further 15 per cent tariff on over US$110 billion (S$153 billion) worth of Chinese imports, including household goods, Bluetooth headphones, clothing and food products.

It is the first tranche of a two-part tariff action that will be slapped on US$300 billion worth of Chinese goods. After the second round kicks in on Dec 15, virtually all Chinese imports will face tariffs by the US.

Beijing hit back with higher tariffs on 1,717 US items, including for the first time, US crude oil.

The second tranche will kick in on Dec 15 along with the second batch of tariffs from Washington.

Despite the fresh tariffs, both sides appear to be on track for face-to-face negotiations to begin again this month.

US President Donald Trump told reporters last Friday that talks with China were continuing, with the September meeting still on the agenda.

Beijing also hinted that talks were going ahead, with Commerce Ministry spokesman Gao Feng saying at a briefing last Thursday that "the most important thing at the moment is to create necessary conditions for both sides to continue negotiations".

Even so, neither side has yet announced a date for upcoming talks.

The 14-month trade war that began in July last year has left both sides bruised.

JP Morgan estimated late last month that the latest round of US tariffs would cost the average American household US$1,000 a year.

China's economy, meanwhile, is growing at its slowest rate in 27 years. Factory activity has slowed for four months straight, according to data released by the National Bureau of Statistics over the weekend.

The Xinhua news agency said the US should "behave like a responsible superpower and stop acting as a 'school bully'". 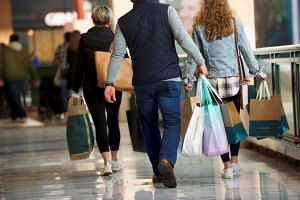 "As the world's only superpower, it needs to shoulder its due responsibility, and join other countries in making this world a better and more prosperous place. Only then can America become great again," it said.

The Communist Party's official People's Daily said China's development cannot be stopped by tariffs, pointing out that the country's "booming economy has made China a fertile ground for investment that foreign companies cannot ignore".

"Obviously, decoupling from China is decoupling from opportunity and decoupling from the future. American companies can understand this better than some people in the US," said the newspaper in its "Zhong Sheng" commentary, which is used to air views on foreign policy.

"The trade war would linger on unless President Trump changes his mind and decides he can settle for a less-than-perfect deal," said Dr Wang Huiyao, president of the Beijing-based Centre for China and Globalisation think-tank.