TOKYO (AFP) - Tokyo's ambulance service has experienced its busiest day in more than 80 years, officials said on Thursday (Jan 25), amid icy conditions as the Japanese capital shivers through its coldest temperatures in decades.

The Tokyo fire department, which runs the ambulance service, said it had responded to 2,826 calls on Wednesday, following rare and heavy snow that sparked chaos in one of the world's most populous cities.

"Generally, we receive more calls in winter. But we think the combination of influenza, heavy snow and cold weather contributed to the record high number," a fire department spokesman told AFP.

The number of emergency call-outs was the highest since the service began in 1936 and well above the average of around 2,000.

The annual number of emergency calls has been on the rise for the past eight years in Tokyo, the spokesman added.

As a cold snap grips Japan, the mercury in Tokyo dropped to minus 4 deg C, the coldest in 48 years, according to Japan's Meteorological Agency.

And the government warned that the glacial conditions in Tokyo would continue. 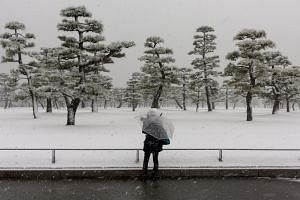 "The weather agency has issued a low temperature warning for Tokyo for the first time in 33 years... The cold weather will continue until Saturday," deputy government spokesman Kotaro Nogami told reporters.

A rare heavy blanket of snow in Tokyo on Tuesday left thousands of travellers stranded and scores injured.

Japan's weather agency recorded as much as 23cm of snow in some parts of Tokyo, the biggest snowfall since February 2014.

The weather paralysed Monday evening's commute as millions of workers battled to get home on the city's famously crowded transport system.