PARIS (Reuters) - France's foreign minister said on Wednesday (Sept 27) that Donald Trump's verbal jousting with North Korea was perhaps not the best method to handle the nuclear crisis and urged the US president to focus his attention on raising diplomatic pressure on Pyongyang.

Bellicose statements by Trump and North Korean leader Kim Jong Un in recent weeks have created fears that a miscalculation could lead to action with untold ramifications, particularly since Pyongyang conducted its sixth and most powerful nuclear test on Sept 3.

"Trump's method is perhaps not the best, but at the same time we shouldn't mix up the responsibilities," Jean-Yves Le Drian told BFM TV.

"The country that is breaking with nuclear international agreements is North Korea. President Trump is reacting forcefully to this, but without a doubt there is a way to act in a different way by putting pressure and sanctions."

North Korean Foreign Minister Ri Yong Ho on Monday accused Trump of declaring war on North Korea and threatened that Pyongyang would shoot down U.S. warplanes flying near the Korean Peninsula after American bombers flew close to it last Saturday. 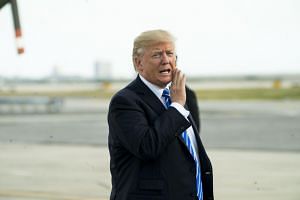 The North Korean minister was reacting to Trump's Twitter comments that Kim and Ri "won't be around much longer" if they acted on their threats toward the United States.

Le Drian repeated that a maximum amount of pressure needed to be placed on Pyongyang to get it back to the negotiating table, but warned there was a risk of an accidental military escalation.

"The world is living in a dangerous period," he said. "At the moment we're at a verbal clash, but there could be an incident. We need to avoid incidents."

President Donald Trump warned North Korea on Tuesday that any US military option against North Korea would be"devastating" for Pyongyang, but said the use of force was not Washington's first option.

China on Wednesday again urged a return to dialogue.

China's Foreign Ministry spokesman Lu Kang said on Wednesday that the North Korean nuclear issue should be resolved through dialogue, and that military means were not an option.

US Secretary of State Rex Tillerson will visit China this week for talks that will include the crisis over North Korea's nuclear and missile programmes and trade, the US State Department said on Tuesday.

Tillerson's trip, from Sept 28 to 30, will also lay the groundwork for President Trump's visit to China in November, US State Department spokeswoman Heather Nauert said.

"We have a good relationship with China," she told a regular news briefing, adding that this was evidenced by what would be Tillerson's second visit to China in nine months in office.