HONG KONG - After close to eight hours of stand-off between police and some 4,000 protesters in Hong Kong on Sunday (Nov 6) night, which saw pepper spray being used and police tactical team deployed, four protesters were arrested and at least one police officer was injured.

The violent clashes had broken out outside the Chinese liaison office during a protest against Beijing's move to intervene in an oath-taking controversy involving two pro-independence Hong Kong lawmakers.

Beijing, which will issue a rare interpretation of Hong Kong's Basic Law or mini-constitution, on Monday (Nov 7), is said to be seeking to bar the two pro-independence lawmakers, Mr Sixtus "Baggio" Leung and Ms Yau Wai Ching, from retaking their swearing-in oath.

Beijing's move, the fifth time it is handing down its interpretation of the Basic Law, has sparked wide concerns that China is tightening its grip on the city. While Hong Kong is part of China, it was granted a high degree of autonomy under the "One Country Two Systems" framework after it was handed back to China in 1997.

Earlier on Sunday, more than 13,000 protesters took part in a protest march which started at 3.30pm, with 4,000 arriving at the Chinese liaison office at close to 7pm. 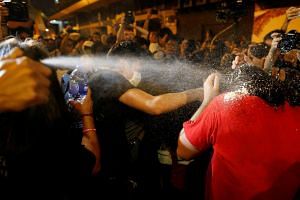 Protesters held up placards and chanted slogans, demanding for Hong Kong chief executive Leung Chun Ying to step down and for Beijing to stop intervening in the city's affairs.

By 8pm, police donned riot gears and closed several roads in the vicinity after the crowd started spreading from the liaison office to occupy sections of a tram track on Des Voeux Road behind the office.

At 10pm, at least four groups of protesters were in stand-offs with police officers in different sections of the road. Ignoring calls to disperse and threatening to stay all night, protesters opened up umbrellas and occupied the tram tracks over an area extending over three tram stops. Young men in hoodies and black masks were also seen carrying dustbins and looking for heavy objects in scenes reminiscent of a riot in Mongkok in February this year.

Police warned protesters that they were involved in an "unlawful assembly" and were told to disperse or face arrest.

At 1am, police including officers from the Tactical Unit, starting moving towards the protesters, forcing them to retreat.

Police holding back protesters in Hong Kong on Nov 7, 2016

An hour later, police officers armed with batons, started chasing the remaining protesters out of the area.

The roads were reopened and traffic resumed by 3am.