SEOUL • Former South Korean president Lee Myung-bak was jailed for 15 years for corruption yesterday, becoming the latest of the country's former leaders to be sent to prison.

The 76-year-old chief executive officer-turned-president, who served from 2008 to 2013, was found guilty on charges including bribery and embezzlement and ordered to pay a fine of 13 billion won (S$15.5 million) by the Seoul Central District Court.

The former South Korean leader was indicted in April on 16 charges that included bribery, embezzlement and abuse of power.

The court found that Lee was the de facto owner of DAS - a controversial auto parts company which he claimed was his brother's - that he used to create slush funds of around 24 billion won.

Lee was also found guilty of accepting nearly 6 billion won from Samsung Electronics in return for a presidential pardon for its chairman Lee Kun-hee, who was jailed for tax evasion.

A Samsung spokesman declined to comment on the ruling.

"Despite objective evidence and credible testimonies, he has denied all offences and shifted responsibilities to others by saying he was being framed," said a judge during the trial, which was broadcast live. 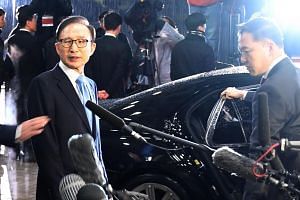 Why South Korea's presidents often get into graft scandals

"Bringing everything into consideration, heavy punishment for the accused is inevitable."

Lee was not in attendance, citing ill health and to protest against the court's decision to televise the ruling.

Lee earlier dismissed what prosecutors say are "incriminating" documents and testimony from his relatives and aides as "fabrications".

His lawyer called the ruling "extremely regrettable" and said the court's finding of Lee as the de facto owner of DAS was "hard to understand". He told reporters he will discuss appealing against the verdict with Lee and reach a decision by Monday, according to Yonhap news agency.

All four former South Korean presidents who are still alive have now been convicted for criminal offences.

Conservative Lee's successor Park Geun-hye was sentenced to 25 years in prison and fined millions of dollars for bribery and abuse of power.

She was ousted last year over a nationwide corruption scandal that prompted massive street protests.

Chun Doo-hwan and Roh Tae-woo, former army generals who were presidents between the 1980s and early 1990s, served jail terms for corruption and treason after leaving office. Both Chun and Roh received presidential pardons after serving about two years.