SEOUL - A former presidential secretary was questioned on Thursday (Nov 17) over allegations he forced a conglomerate to sack its vice chairwoman as prosecutors widened their probe into a massive influence-peddling scandal.

The new development has again cast the spotlight on the close links between politicians and businessmen in Asia's fourth largest economy.

"I will tell everything to the prosecution," Cho Won Dong told reporters before entering the prosecutors' office in Seoul.

Earlier on Thursday, Cho was sentenced to six months in prison, suspended for a year, for causing a traffic accident while driving under the influence of alcohol in October last year.

A senior economic secretary to President Park Geun Hye from 2013 to 2014, he faces allegations that he pressured CJ Group to remove its chairwoman Milky Lee Mie Kyung in late 2013. Ms Milky Lee is the granddaughter of Samsung Group’s founder Lee Byung Chul.

He reportedly said the move was an order from the president, according to Yonhap news agency. 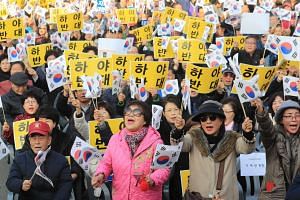 In the phone conversation, the presidential secretary, identified by Korea Times Thursday as Cho, said that there would be consequences if the request was not followed.

When the CJ executive, Mr Sohn Kyung Shik, asked if that was VIP's idea, the presidential secretary replied "Yes", according to a Korea Times report.

Ms Lee was at that time managing the CJ Group following the imprisonment of her younger brother, CJ Group Chairman Lee Jae Hyun, on charges of embezzlement and tax evasion.

She abruptly left for the US in 2014, citing health problems. She returned home to attend the funeral of her father in August 2015, but she has mostly been living in the US and China since then.

Ms Lee, who was in charge of the chaebol's entertainment arm, reportedly ruffled feathers after the company produced and aired content deemed "unfavourable to the government", reported local media.

The scandal flared in October when it emerged that Ms Park, widely considered a distant figure, was being secretly advised by a friend of 40 years, a woman with no policy background but with ties to a religious cult.

The woman, Choi Soon Sil, is accused of receiving classified information and of using her ties to President Park to raise up to US$70 million (S$99.1 million) from big business groups for two foundations, most of which she is said to have siphoned off. Choi is in custody and is expected to be indicted this week.

Experts say the kind of close ties between the business and the political circles is partly the result of government-sponsored industrialisation following the end of Korean War.

It was Ms Park's father, authoritarian president Park Chung Hee, who supported the creation of corporate giants such as Samsung and Hyundai, encouraging links between government and business in the 1960s and 1970s that remain strong today. CJ Group is a Samsung offshoot.

Ms Park learned about the coalition between business and politics from her father, said Professor Kim Dong Choon, a professor of social sciences at Sungkonghoe University, and has repeated his method.

"Park's watch stopped in the 1970s," he told Washington Post.

This scandal comes just after South Korea enacted a new law designed to root out bribery and corruption, forbidding people from spending more than US$27 on a meal for public officials, state-run company employees or journalists. But that law was designed to target corruption at the lower end of the scale, doing little to address the kind of issues raised in "Choi-gate," as it's known here.

Almost two-thirds of people surveyed by the Anti-Corruption and Civil Rights Commission in 2014 said they thought South Korean society was corrupt.

"This is not just about Park's and Choi's misdeeds, but other forces - the prosecutorial system, the bureaucratic system - and the shortcomings that have made this incident possible," Professor Kim told Washington Post.

"This is a great opportunity for Koreans to rebuild our society and our politics, to overcome old way of thinking."