BEIJING (REUTERS) - Five years after the charismatic and high-profile former Communist Party boss of the Chinese metropolis of Chongqing was jailed for life for graft, the city has yet to fully root out his "evil legacy", its top official said on Tuesday (March 6).

Bo Xilai, once seen as a contender for top leadership in the world's second-largest economy, was jailed in 2013 for bribery, corruption and abuse of power in a dramatic scandal kicked off by his wife's murder of a British businessman.

Scandal has followed the city, with another party boss, Sun Zhengcai, put under investigation for his own graft problems last year and charged with bribery last month. He had once also been considered a contender for a national leadership position.

President Xi Jinping, who has overseen a sweeping war on corruption since coming to power in late 2012, then parachuted in a close ally of his to take over Chongqing, Chen Min'er. Located in south-western China, Chongqing is one of China's most important cities.

Speaking to reporters on the sidelines of the annual meeting of China's parliament, Chen said the cases of Bo and Sun were more than just ordinary corruption - more important was their political corruption.

"They both are the source of the pollution of the political ecology, and they massively harmed Chongqing's officials," he added. 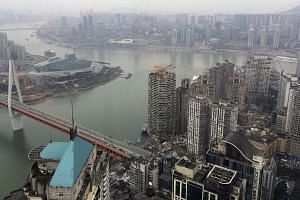 "Everyone has heard that the evil legacy of Bo Xilai's thinking has yet to be purged, so we must purge it together with the pernicious influence of Sun Zhengcai," Chen said.

People must rally round the authority of the party's central leadership with Xi at its core and ensure that politically Chongqing moves and thinks as one with the party to ensure all its policies are fully put into practice in the city, he added.

"Under the correct leadership of the party centre, and under the care, concern and guidance of the general secretary, today's Chongqing is united as one in going forward, and tomorrow's Chongqing will be even better," Chen said, referring to Xi's formal title as head of the party.