Residents tell of their terror; hundreds of people, dazed and hurt, stream into hospital

The carnage was clear. A day after two massive explosions unleashed a huge fireball that lit up Tianjin's night sky and rained debris on the city, plumes of black smoke continued to rise from the smouldering ashes of its devastated port area.

While the road to the blast site was sealed off, some of the factories about 2km from the site that I visited yesterday had become a ghost town. It was quiet as workers stayed at home but the buildings bore the scars of the deadly explosions that have shaken the northern port city of 15 million to its core.

The blasts occurred at a warehouse that stored dangerous goods, state media said. Fire-fighting crews were trying to put out fires in several burning shipping containers just before the blasts, reports said. A dozen firefighters died, 18 are missing, with dozens more among the injured.

"The entire sky lit up and the building shook and all the lights went out," said Mr Liu Tao, who lives in a residential building close to the site of the explosion.

"Before I knew it, there was a second explosion and the glass in my living room had shattered. It was chaos everywhere," he told The Straits Times. He suffered a gash on his arm from a glass shard.

Ms Zhang Min, who lives about 4km from the blast area, was sleeping at the time. "The blast moved me across my bed. It was terrifying so we took the whole family down to the lobby to find out what was happening," she said. Across a wide area of the city, windows were shattered, ceilings collapsed and doors were blown off their hinges by the sheer force of the blasts, the larger of which was said to be the equivalent of detonating 21 tonnes of TNT. There was glass everywhere.

Closer to the explosion site, thousands of cars were incinerated and buildings were blackened ruins.

It is hard to imagine the panic Tianjin residents must have felt as the night sky turned a hellish red and a mushroom cloud of acrid smoke, said to be 100m high, rose and consumed the city. 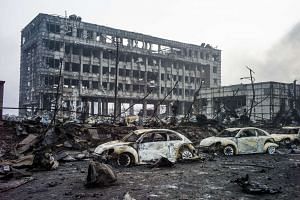 SKY LIT UP BY FIREBALL

The entire sky lit up and the building shook and all the lights went out. Before I knew it, there was a second explosion and the glass in my living room had shattered.

MR LIU TAO, who lives in a residential building close to the site of the explosion.

Residents I interviewed said they were terrified. Some spoke of an "earth-shaking roar", the loudest they've ever heard, and of how the larger blast's shockwaves shook their buildings violently, knocked over heavy furniture and threw them across their rooms.

Those who spoke to other media told a similar story. "I was sleeping when our windows and doors suddenly shook as we heard explosions outside. At first, I thought it was an earthquake," Mr Guan Xiang, who lives about 7km from the explosion site, told Reuters by telephone.

THROWN BY FORCE OF BLAST

The blast moved me across my bed. It was terrifying so we brought the whole family down to the lobby to find out what was happening.

MS ZHANG MIN, who lives about 4km from the blast area.

Yesterday, hundreds, dazed and injured, some covered in blood, continued streaming into Tianjin's Teda Hospital as doctors worked tirelessly to bandage their wounds.

Many were hurt from flying glass shards as they stood at their windows, drawn by the commotion caused by the first explosion, before the second, more violent blast hit and shattered their windows.

Some family members of those missing were in tears, hoping to find their loved ones in the hospital rather than on a casualty list.

Tianjin residents rallied together; some handed out bottled water and food while others helped to direct traffic. Those who drove helped ferry the injured to hospital.

Pictures circulating online of tearful residents saluting a dead firefighter as he was wheeled into Teda Hospital, still in uniform, his skin blackened from smoke, moved me.

I felt the true devastation of the city then, not the charred buildings or broken windows, but the pain of the 50 precious lives that were lost.