Labour Ministry admits that real wages might actually have fallen

Japan's Labour Ministry has drawn flak after it was found to have released faulty job data for years, in what the opposition has slammed as a ruse to burnish the sheen of Prime Minister Shinzo Abe's economic policies.

Among other things, the improperly-compiled data has been used to determine unemployment benefits pegged to real wage growth.

While observers have long said that official wage data seem far from an accurate reflection of the realities on the ground, the admission by the Labour Ministry that real wages might have actually fallen for most months last year will put pressure on an economy that still suffers sluggish spending.

Revised figures, showing that real wages dropped by an average of about 0.5 per cent year on year in the 11 months to November, are expected to be presented to Parliament this week. This is worse than the average 0.05 per cent decrease announced previously.

"Abenomics is nothing but a costume," Mr Tetsuro Fukuyama, secretary-general of the main opposition Constitutional Democratic Party of Japan said in Parliament.

Mr Yuichiro Tamaki, who leads the opposition Democratic Party for the People, said the situation amounts to "wage forgery".

Mr Abe apologised for the scandal but stressed that the issues with data collection does not extend to the gross domestic product, adding: "I've never emphasised the achievements of Abenomics by referring only to the figures in question."

Abenomics is nothing but a costume.

MR TETSURO FUKUYAMA, secretary-general of the main opposition Constitutional Democratic Party of Japan, on what the opposition perceives as a ruse to burnish the sheen of PM Shinzo Abe's economic policies.

I've never emphasised the achievements of Abenomics by referring only to the figures in question.

MR SHINZO ABE, Japan's Prime Minister, on the issues with data collection not extending to the gross domestic product.

Public broadcaster NHK reported on Saturday that senior labour ministry officials had known, since 2006, there were issues with data collection, but had not come clean.

While this predates Mr Abe's administration, the Nikkei newspaper cited sources as saying that senior government statistical bureaucrats were aware from about 2013 of possible irregularities in the data.

This latest scandal follows a litany of bureaucratic wrongdoings in the last two years that would have brought down a Japanese government in the past: cooked Finance Ministry records over a questionable sweetheart land deal, inflated data on the hiring of persons with disabilities, and the mismanagement of Self-Defence Force military deployment logs.

But approval ratings for Mr Abe, now into his seventh year in power discounting a short-lived stint in 2006, remain steady.

Media polls suggest the public continue to favour Mr Abe after a revolving door of six Premiers in as many years, and as the opposition camp is in disarray with local and national elections looming this year.

But a series of missteps could hurt public trust in the civil service.

A neutral commission, convened last month to get to the bottom of why 23 out of 56 fundamental job indicators had been improperly compiled since 2004, turned out to be anything but independent, as senior labour ministry officials conducted some of these interviews.

Under the Monthly Labour Survey, the ministry is supposed to study all corporations with at least 500 employees. But from 2004, officials reviewed only about a third of these companies in the Tokyo area. 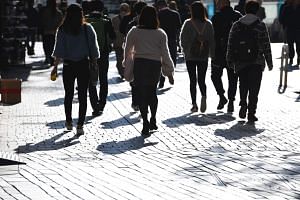 As such data is used to determine unemployment and other benefits, more than 20 million people ended up being shortchanged about 56.8 billion yen (S$701 million) - which Tokyo has promised to return.

Mr Abe has resisted opposition calls to dismiss labour minister Takumi Nemoto, who he named to the role in a Cabinet reshuffle in October, saying he wants him to "continue taking a leading role to swiftly repay the missing benefits".

There has been criticism from within his ruling Liberal Democratic Party (LDP). Some said it is necessary to break up the massive Ministry of Health, Labour and Welfare and "restart it from scratch".

The ministry was formed in 2001 through a merger of two ministries, and the party's chief of the health, labour and welfare division Shinjiro Koizumi was quoted as saying that it is "very worrisome that governance at the ministry is broken".

The Nikkei Asian Review said in an editorial: "Salary and wage data is not only closely watched as a key indicator of personal income and consumer spending, it is also used to assess the effects of government policies. The ramifications of faulty numbers are, therefore, enormous."

The problems with shoddy data collection, however, continue to reverberate. Last Friday, the Ministry of Internal Affairs and Communications revealed problems with its survey methods in a retail price indicator that is used in calculating the consumer price index.