BEIJING • Companies and trade groups in the US and China have expressed concern over how the escalating trade spat between the world's two biggest economies could affect operations.

US President Donald Trump announced on Friday tariffs on tens of billions of dollars in Chinese imports, triggering retaliation from China and igniting a trade dispute that threatens to cut into the countries' massive bilateral trade - potentially harming exporters and US multinationals keen on China's huge market. The first wave of 25 per cent US tariffs will hit US$34 billion (S$46 billion) in goods and take effect on July 6, with another US$16 billion still to be reviewed, the US Trade Representative (USTR) said.

The USTR's final list includes 1,102 product lines, down from about 1,300 initially, mainly focused on China's "Made In 2025" plan to become dominant in high-technology industries such as robotics, aerospace, industrial machinery and automobiles.

Hours later - early yesterday in China - the Chinese finance ministry issued a list of 545 product categories, also covering about US$34 billion in exports from the US, to be subject to an additional 25 per cent tariff starting also on July 6.

They included a variety of agricultural products, including soya beans, beef, pork and poultry, plus automobiles.

A second set of tariffs to begin at a later date listed other goods including coal, crude oil, petrol and medical equipment.

"The wise man builds bridges, the fool builds walls," the official Xinhua news agency said in an editorial, echoing official comments that China would defend its interests in a trade war.

An editorial in the ruling Communist Party's official People's Daily condemned what it called the Trump administration's "obsession with playing the disgraceful role of global economic disruptor".

The official English-language China Daily, meanwhile, expressed hope a trade war might yet be averted.

Agricultural trader Cargill, the largest US private company, called for dialogue between Beijing and Washington so that businesses, farmers and consumers would not be caught up in an all-out trade war. "Trade conflict... will lead to serious consequences for economic growth and job creation and hurt those that are most vulnerable across the globe," said Ms Devry Boughner Vorwerk, a vice-president at Cargill.

A spokesman for grain trader Archer Daniels Midland also said bilateral dialogue should be pursued, adding that China "continues to be an important export market for American food and agriculture". 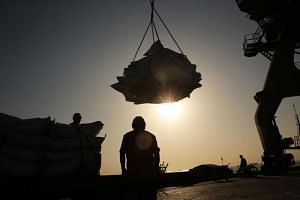 Across US, wary businesses gird for a Trump trade war on the world

How Trump-China trade spat is rippling through corporate America

China is US' biggest and most strategic trade target

Boeing said they were beginning to evaluate the tariffs' possible effects. The aircraft maker garnered about 12.8 per cent of its 2017 revenues from China and is frequently seen as among the more vulnerable US multinationals to a full-on trade war. "We are assessing the impact these tariffs and any reciprocal action could have on our supply chain and commercial business," said Boeing spokesman Charles Bickers.

From China, WH Group, the world's largest pork company, is expected to widen its losses after a 10.7 per cent slump in its stock over the past week. The hog industry relies on soya bean meal, a product of soya bean crushing, to feed its pigs. WH Group also gets more than half of its revenue from the US.

Friday's announcements by Washington and Beijing cap months of sometimes fraught shuttle diplomacy between Washington and Beijing, in which Chinese offers to purchase more US goods failed to assuage Mr Trump's grievances over a soaring trade imbalance and the country's industrial development policies.

US trade groups also stepped up their criticism of the spat.The American Apparel & Footwear Association (AAFA) said on Friday that China's retaliatory measures could harm American farmers and textile manufacturers and add costs to the industry's supply chain.

"President Trump is fixated with tariffs, which he believes he can wield freely; but there are grave consequences," said AAFA president Rick Helfenbein.

Other trade groups opposing the US tariffs included the Business Roundtable and the US Chamber of Commerce.