BEIJING - China's Ministry of Public Security has warned parents to watch over their children and teach them well, after a boy, who urinated over a set of lift buttons, got trapped in the lift.

His act had caused the lift to short circuit.

The ministry said the boy had dashed into the lift to pee when he found that no one else was taking the lift, Chinese news website thepaper.cn reported.

He lets out a stream of urine at the lift buttons, zips up his pants and prepares to exit the lift.

But when the lift reaches his floor, the doors open only slightly, before closing immediately.

The boy appears distressed as the lights began to flicker wildly.

Chinese media reports said the boy was later rescued by building maintenance staff and he was not hurt. 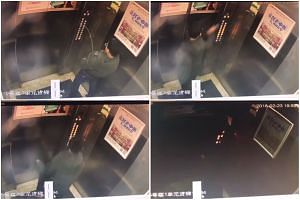 The ministry reiterated its warning to parents: "Please educate your child, and exercise parental control."

The boy's father questioned, however, the authenticity of the video, Beijing News reported.

The father said that his son could not yet urinate that high, and his son also would not admit to peeing in the lift.

Over 20,000 netizens have commented on the video on Sina Weibo.

"The building should change the lift to ensure safety for other users, and the cost should be borne by the boy's parents," said one netizen.

Another said: "The lift was too kind to the boy. It should have plunged to the ground to teach the boy a lesson. He will definitely grow up to be a bad guy."