BEIJING - Chinese media were mostly positive about US President Donald Trump's recently-concluded visit to Beijing, saying his and Chinese President Xi Jinping's constructive approach to handling their countries' relations made for smoother ties ahead.

Mr Trump's three-day visit, which ended on Friday (Nov 10), had infused some warmth into the difficult relationship between the world's two most powerful nations.

Mr Xi played host to the American leader and Mrs Trump when they arrived on Wednesday. Over cups of tea at the Forbidden City, the imperial palace of China's Ming and Qing emperors, Mr Trump showed Mr Xi videos of his granddaughter, Arabella Kushner, six, reciting Chinese poems and singing Chinese songs. The first couples also dined together at the historic site.

China gave its important visitor not just a red-carpet welcome, but also a huge gift of more than US$250 billion (S$340 billion) in commercial deals that Mr Trump said was a "very, very good start" towards reducing the massive trade deficit the US has with China. The deficit hit US$347 billion last year.

The English-language China Daily said in an editorial that "the most important takeaway" from the leaders' talks in Beijing was the "constructive approach" they had taken towards differences between the two countries.

It added: "Such precious progress in trying to find common ground, along with the Chinese commitment to establish a constructive 'new-type of relationship' with the US, as Xi again elaborated in his talks with Trump, will go a long way to anchoring the all-important, yet sometimes volatile, Sino-US relationship."

In particular, it noted, the leaders had expressed willingness to work with instead of against each other on issues such as trade and the North Korea nuclear programme, two problems that Mr Trump had highlighted before his trip to China.

He had called the trade deficit "embarrassing" and "horrible" and asked Beijing to do more to rein in Pyongyang's nuclear and missile programmes that were threatening the peace in the North-east Asian region.

The nationalistic Global Times was more measured in its assessment of the visit, saying: "From the Mar-a-Lago summit to the Forbidden City visit, Sino-US ties are becoming more mature." The two leaders had met first at Mr Trump's resort in Florida in April.

It added in its editorial that if the "cooperative spirit" of the two leaders' meeting "is spread to all fields of Beijing-Washington exchanges, no problem will pose a fundamental challenge to bilateral relations". 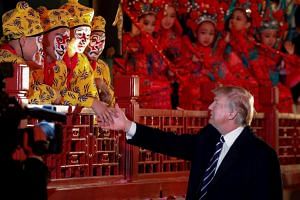 On the North Korea nuclear issue, it said China had tried its utmost, even at the sacrifice of its ties with the North. Mr Trump "can't demand more".

Many media outlets focused on the economic relationship.

The Beijing News, noting the record-breaking total size of the commercial deals signed, said the deepening of trade and economic ties will ensure the stable development of the overall China-US relationship.

It added that  trade and economic relations between the two countries had always been the "ballast" and "driver" of bilateral ties, a point that was repeated by commentators elsewhere.

The New York Times reported that Mr Trump, who left for Vietnam on Friday, had acquired a legion of admirers in China who "hail him as a straight-talking politician and business mogul with a knack for deal-making".

Still, as the China Daily acknowledged, "the differences that have been pestering bilateral ties have not instantly disappeared".