HONG KONG • A Malaysian doctor has been sentenced to life behind bars for poisoning and killing his wife and daughter with a leaking yoga ball which he had filled with carbon monoxide.

The mother and daughter were found dead in a yellow Mini Cooper driven by Ms Wong, gassed by the inflatable yoga ball which prosecutors alleged - without providing evidence - that Khaw had placed in the boot.

Khaw, a doctor at the Prince of Wales Hospital in Sha Tin and an associate professor of anaesthesiology at the Chinese University of Hong Kong, was seen by colleagues filling two yoga balls with carbon monoxide.

He told them he planned to use the gas on rabbits in an experiment, but later told police it was meant to get rid of rats at home.

He said he put the two balls in his car and deflated one the next day as it was leaking.

Prosecutors alleged that Khaw, who was having an affair with a student and whose wife refused to divorce him, had orchestrated a "deliberate and calculated" plot in ordering carbon monoxide through his university office and claiming it was for research purposes. 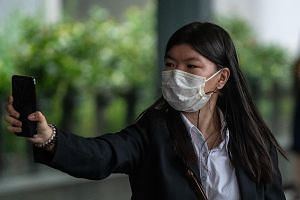 But the jury did not believe him. High Court judge Judianna Barnes yesterday said the murders were premeditated and sentenced him to life in prison for each count of murder, Apple Daily reported.

After the sentence was passed, Khaw reportedly turned to look at his three other children, who were also in court to hear the verdict, shaking his head as if to say he did not do it despite the court decision, according to Apple Daily.

Khaw's case was one of two murder cases in the Chinese territory that have made headlines worldwide recently.

University of Hong Kong lecturer Cheung Kie Chung, 53, was last month charged with the murder of his wife, whose body was found stuffed in a suitcase in his office after he reported her missing.