TAINAN (Taiwan) • Prosecutors in the southern Taiwan city of Tainan have arrested the developer of a building that collapsed during an earthquake last week, killing at least 39 people, a government official said yesterday.

Mr Lin Ming-hui, the developer of the toppled Wei-guan Golden Dragon Building, was detained on suspicion of negligent homicide on Monday, said Mr Hsiao Po-jen, director of the legal affairs department of the Tainan city government.

Mr Lin, as well as two of his employees, were taken to the Tainan district court for questioning early yesterday, said a police officer from the local prosecutors' office. A court spokesman said the court would decide whether the three should be formally detained at a court session yesterday evening. 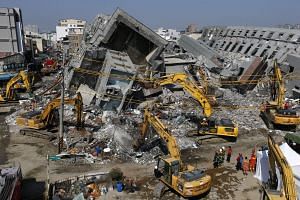 The quake struck at about 4am local time last Saturday, with almost all the dead found in the building.

Questions have been raised about the building's construction quality, especially the materials used to build it, prompting prosecutors to launch a probe into the collapse.

Under the current regulations, they would never have been allowed to build such a big building. When the design and blueprints were done, they probably did not allow for earthquakes.

MR LEE KUN-HUAN, an architect and a Tainan City councillor, on why the building was possibly doomed from the start.

Witnesses at the scene of the collapse have seen large, rectangular, commercial metal cans packed inside wall cavities exposed by the damage - they had apparently been used as building material. The Taiwanese media also reported the presence of polystyrene in supporting beams, mixed in with concrete.

Tainan Mayor William Lai earlier said survivors and relatives had reported there were legal "violations" in the 16-storey building.

"We've also commissioned three independent bodies to preserve evidence during the rescue so we can assist the residents if they want to file lawsuits in the future. We will hold the builder responsible if they have broken the law," said Mr Lai.

A civil engineering team sent by the city to examine the complex found the blocks had fallen towards the east of the complex, the first floor of which was a row of shops. It believed that the reduced number of walls and pillars in the shops had weakened the building.

Local media reported that the construction and engineering companies involved in the building of the complex had gone out of business, and also raised questions about the quality of the materials used.

Glass-factory engineer Yang Yu-min, 40, whose home is across the street from the Wei-guan, said there were many clues to suggest the building had been doomed. "Locals never bought condos there because the builders did not have a good reputation," he said.

Construction was bedevilled with problems, say neighbours. Mr Yang said the construction firm ran out of money for the project. It hastily erected the Wei-guan's steel shell, then left it idle for months.

Mr Lee Kun-huan, 64, an architect and a Tainan City councillor, said the building's developers exploited loopholes in local regulations that have since been closed.

"Under the current regulations, they would never have been allowed to build such a big building," he said. "When the design and blueprints were done, they probably did not allow for earthquakes."

With nine buildings joined to form a "U", the complex filled every inch of its site - newer regulations restrict construction to 60 per cent - and overhung the surrounding pavements on columns that failed as the earth moved. It was also nearly six times as tall as the mostly three-storey structures around it.

Mr Lee said the complex's design was inherently less sturdy than the square-shaped structures in the area, and that without a fourth wall to hold the ends of the "U", the entire building fell in the opposite direction during the quake.

Mr Lee also said that Mr Lin had been involved in many business disputes over the years, and that he had changed his name four times as he started new ventures.

Taipei Mayor Ko Wen-je said the killer quake would speed up urban renewal projects in the capital that had been hampered. "It would cause huge risks for our citizens should any earthquake of the same scale hit the Taipei area," he told reporters.