Do not rush to lift sanctions as Pyongyang has no plans to ditch arsenal, says ex-envoy

A prominent defector has urged the United States to focus on getting North Korea to give up its nuclear weapons and facilities and return to the non-proliferation treaty at next week's Trump-Kim summit, instead of being too quick to lift some of the economic sanctions hurting the regime.

Mr Thae Yong Ho, who was deputy ambassador at the North Korean embassy in London before defecting to South Korea in 2016, also warned that Pyongyang has no intention of surrendering its nuclear arsenal and may, in fact, view the Feb 27-28 summit in Hanoi as a chance to gain recognition as a de facto nuclear weapons state.

Speaking to the foreign media in Seoul yesterday, Mr Thae also said that the North may seek to sell its nuclear weapons and know-how to other countries if negotiations with the US fail.

Nuclear dissemination could be the "new path" stated by North Korean leader Kim Jong Un in his New Year's Day speech, he added.

Mr Thae's comments came as preparations are under way for Mr Kim and US President Donald Trump to meet in Hanoi. US special representative for North Korea Stephen Biegun is expected to meet his North Korean counterpart, Mr Kim Hyok Chol, there this week to discuss summit details.

The two leaders met in Singapore for their first summit last June and inked an agreement to work towards complete denuclearisation of the Korean peninsula.

But both sides have failed to make any progress due to US demand for concrete action first before easing sanctions, while the North is pushing for corresponding measures. 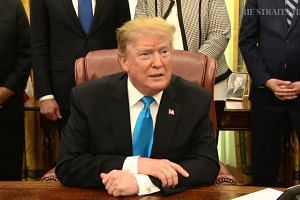 North Korea unlikely to give up all nuclear weapons, say US commanders

On Jan 1, Mr Kim warned that the North could "seek a new path" if the US "misjudges our patience and forces things upon us while maintaining sanctions and pressure instead of keeping the promises it made". He did not give details.

Some experts said he might return to provocations, but Mr Thae reckons that a more likely scenario would be one where the North exports its nuclear capability to the Middle East.

"They'd play the nuclear dissemination card instead of (conducting) testing," he added.

According to Mr Thae, North Korea had staged provocations to manipulate the US into thinking that there is a nuclear crisis on the Korean peninsula. This would eventually force the US to go into negotiations with the North and indirectly recognise the regime as a nuclear weapons state.

"Unfortunately, the US President fell into this trap," he added.

Mr Thae also warned the US against adopting a Trump Doctrine, where the superpower cares only about eliminating North Korea's nuclear threat against itself and neglects its ally South Korea.

"If the US is really trying to achieve denuclearisation on the Korean peninsula, it is necessary to require North Korean leader Kim Jong Un to declare discarding his nuclear weapons and facilities, and to return to the non-proliferation treaty," he said.

What Mr Kim will want in return is sanctions relief, like the resumption of inter-Korea projects, including the Kaesong Industrial Complex and Mount Kumgang tours.

These concessions may seem small, but Mr Thae warned that they may eventually lead to China and Russia also demanding to resume trade with the North. China is the North's only ally and largest trade partner.

"North Korea is looking for a breakthrough by focusing on Kaesong and Kumgang, but the bigger fish is China."