But working weeks without a break and asking his own employees to work 20-hour days, Lee was consumed by pressures of his own.

He killed himself within days of completing the project, leaving behind a note that decried a South Korean work culture that exploited him and required him to exploit his crew in turn.

"I too was nothing but a labourer," Lee wrote.

But to them, he added, "I was nothing more or less than a manager who squeezed the labourers."

Lee's message reverberated across South Korea, a country that has long worked too hard.

While Japan famously brought the world the concept of "death from overwork," South Koreans work longer hours, according to labour data. 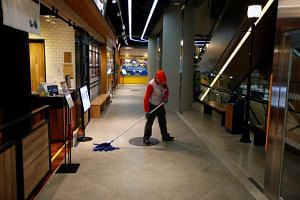 In fact, they put in 240 more work hours per year than Americans do - or, put another way, an extra month of eight-hour workdays.

The South Korean police say work pressure plays a role in more than 500 suicides a year, out of a national total of about 14,000.

South Korea's leaders are trying to change that. A new law that went into effect this month caps workweeks for many employees at 52 hours.

The government is pushing companies to let employees go home for the night and to free up their weekends.

A call to the Ministry of Labor is greeted with a recorded voice message that says, "Our society is breaking away from overwork."

The extra time off is especially liberating for young workers, who often don't share the work-at-all-cost ethos of their parents.

Woo Su-jin, a 26-year-old computer graphics designer, said the media outlet where she works now allows her to arrive later in the morning if she worked late the night before.

Project discussions over food and drinks that used to last from 7 pm to 1 am now end earlier, after one round of drinks rather than three.

"My colleagues and I say that we would rather go home earlier than work long hours, even if we were paid for working overtime," Woo said.

South Korea's feelings about work are complex. Pride in hard work helped propel the once-rural country out of the ashes of war and transform it into an economic power, producing brands like Samsung and Hyundai that are known all over the world.

Working long hours also used to be seen as a badge of honour, especially for the male breadwinner in a patriarchal society.

But even then, some workers called attention to difficult conditions. The self-immolation of a factory worker at the start of the 1970s labour movement is still evoked by activists today. South Koreans often suffer from a work culture they call gapjil. This word describes the imperious sense of entitlement that authority figures feel over their employees, whom they expect to wait on them and cater to their whims.

The most famous example is the "nut rage" incident, in which the daughter of the chairman of Korean Air threw a tantrum over how she was served nuts on a flight.

The incident and workplace deaths - including the suicide of Lee, the television producer - have given new urgency to South Korea's efforts to change its workplace culture.

When a government employee, a new mother, died in 2017 after collapsing at her office on a Sunday morning, President Moon Jae-in, who was still a candidate at the time, wrote on Facebook: "We can no longer be a society where overwork and working until late is a given."

Nor are long work hours good for the economy. Labor productivity has slowed considerably, while unemployment among young people has reached 10 per cent despite a much lower national rate overall.

Moon, who was elected in 2017, and labour experts blame outdated workplace practices, including those in government, that allow managers to keep employees on call to complete tasks as they come up.

Though that system gives managers more flexibility to assign work, it does not necessarily benefit the organisation as a whole.

"It worked in the past when Koreans were hungry," said Yu Gyu-chang, a professor of human resources management at Hanyang University.

"But times have changed now." Moon wants companies to hire more people to get the work done. He cites research that showed a rise in labour productivity with every percentage point of weekly work hours reduced.

During his campaign, he pledged to create 500,000 new jobs by enforcing a 52-hour workweek.

"Habitual long-extended work has been the culprit behind Korea's low labour productivity," he said this month after the workweek cap took effect. That message has found a sympathetic audience among the young in South Korea, who have learned to prize their leisure time as old attitudes have loosened.

Until a five-day workweek was introduced in 2004, many South Koreans did not experience free Saturdays.

"Before, people sacrificed their present to guarantee their futures," said Yu, the professor.

"Now, people have to be and want to be happy now."

Many companies are enacting new policies to comply.

More than 700 of South Korea's 3,672 large companies and public sector organisations have either hired new employees or have plans to do so, the Ministry of Labor said, although it did not track whether these new hires would be working full time.

Other organisations have introduced policies to limit routine overtime work. Seoul's city government began in May to enforce mandatory lights out and computer shutdowns on Fridays at 7 pm.

At the insurance company where Park Jung-min, 46, works, computers are automatically shut off at 6 pm Employees are also encouraged to request advance permission to work overtime.

"If we don't know in advance that we might have to work after 6 pm, then we have to turn on the computer again after 6 and provide reasons for doing so," said Park, who described it as an occasional nuisance.

"But all in all, I think this new 52-hour workweek is good for our work-life balance that Koreans now want more of."

Loopholes still abound, critics say. It isn't clear whether business trips or entertaining clients would count toward the 52-hour cap. Some industries, like health care and transportation, have received exemptions. Companies could also find other ways to avoid hiring more people.

"Employees would take their work home, which would be an unspoken agreement between bosses and underlings," said Kim Yu-kyong, a public labour attorney at the Organization for the Human Rights of Workers.

The Union for Broadcast Workers, which was formed by freelance employees in the television industry after the new law went into effect earlier this month, said it received more than 30 complaints within the first two days.

One employee, it said, worked from 7 am to 3 am and was asked to report to work at 7 am the following day.

"That only leaves time for a worker to go to a public bathhouse to have a shower and an hour or so of sleep," said Kim Du-young, a union official.

Though it will be another two years before the maximum work hours are enforced for smaller companies, many see the mandate for reduced work hours as long overdue. "

It has to work," Kim of the Union for Broadcast Workers said.

"So far, the existing practice had been too inhumane."