WASHINGTON (REUTERS) - China's economy will take a big hit in the first quarter due to widespread work stoppages caused by the fast-spreading coronavirus, but should recover rapidly unless the outbreak worsens again, a Chinese official told Reuters on Friday (Feb 28).

The Washington-based official, who asked not to be named, said China had already taken a series of economic measures to respond to the outbreak, and would stick to a flexible monetary policy as it sought to rapidly restore normal production across the country.

"It's going to have a big impact in the first quarter of the year, but with the restoration of economic orders, we hope the situation should be much better from the second quarter," the official said.

"If the situation does not get worse... I believe the Chinese economy is going to recover very rapidly."

The outbreak has slowed in China, with 327 new cases reported on Friday, the lowest since Jan 23, bringing the total there to 78,800 cases and almost 2,800 deaths.

However, the disease is now spreading across the globe, with the first case reported in Nigeria on Friday and 888 people infected in Italy.

The International Monetary Fund has said the outbreak will likely lower China's economic growth by 0.4 percentage point this year to 5.6 per cent and shave 0.1 percentage point from global growth, but it continues to look at more dire scenarios.

The Chinese official said the coronavirus outbreak could cause "a dramatic fall" in the global economy if it spread to a wide range of countries, but gave no specific forecasts.

Beijing remained committed to boosting purchases of US goods and services by US$200 billion (S$270 billion) under the Phase 1 trade deal over the next two years, the official said, noting moves by China's customs office to lift ban on beef and other products.

"The two sides are quite serious about the implementation,"said the official, who met this week with officials from the US Trade Representative's office and the US Commerce Department.

"So far, we don't foresee any problem." 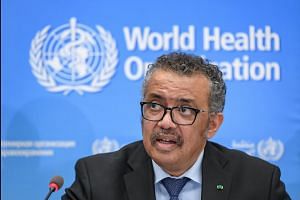 China is urging Washington to ease its travel ban for people from China, which has prevented in-person meetings needed to move forward with implementation, the official said.

The travel ban has also halted tourism, a key contributor to the expected increase in China's purchases of services from the United States, the official said.

"This does make additional difficulties for the two sides to meet the targets," the official said, adding there had been no change in the target of boosting Chinese purchases of US goods and services by US$200 billion the next two years.

"That number is still there," the official said.

More than 4,000 Indians die of Covid-19 for second straight day

Bees in the Netherlands trained to detect Covid-19 infections