In the editorial, the paper says Japan should consider opening its doors to sustain its economic growth.

TOKYO (THE JAPAN NEWS/ASIA NEWS NETWORK) - How should this country cope with a serious population decline and sustain the vitality of its society and economy? To expand the acceptance of foreign workers, it is necessary to discuss the issues on the basis of mid- and long-term strategies.

The bill to revise the Immigration Control and Refugee Recognition Law, now under deliberation at the Diet, calls for establishing new residence statuses and allowing foreign nationals to use them to work only in industries saddled with serious labour shortages.

With regards to the 14 industries in which foreign workers will be newly accepted, the government has released projected figures for labour shortages and for the number of foreign workers to be accepted.

The overall shortage is estimated to be 580,000 at present, and was projected to reach 1.45 million five years from now. After subtracting from these figures, increases in the number of elderly and women workers and the like, a maximum of 47,000 foreign workers will be accepted in the fiscal year when the planned revisions take effect, and up to 345,000 over the five years from the revisions.

It is interpreted that about 20 per cent of the labour shortages will be covered by foreign workers.

For this country to be able to achieve sustainable economic growth and maintain certain levels of welfare services and the like, it will be inevitable to open its door to foreign workers. 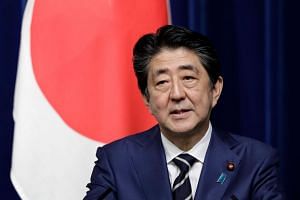 In the area of nursing care for elderly people, the securing of up to 60,000 foreign workers is projected over five years.

It is believed that the demand will not be met even if such steps are taken as preventing workers from leaving this job sector by improving their job conditions, or introducing the use of nursing care robotics.

In the food service industry, up to 53,000 foreign workers will be accepted, and up to 40,000 in the construction industry.

It is meaningful that business sectors broadly share an awareness of the problems concerning the grave situation they find themselves in.

The calculations for the number of workers to be accepted were the sum of estimates for each business sector.

Regarding the number of foreign workers to be accepted, Prime Minister Shinzo Abe gave a reply in the Diet, saying that the number "will be maintained as the upper limit over five years."

The employment situation will also be greatly swayed by such factors as economic trends and technological innovation.

The number should be regarded as just a yardstick and may need to be flexibly reviewed.

On the other hand, if the influx of foreign workers increases without control, there are concerns that this will cause turmoil at workplaces and disrupt the public order of local communities.

The bill contains measures to be taken to suspend the acceptance of foreign workers if competent ministries and agencies judge that the required number of manpower has been secured.

The government must make clear its criteria for judging and guidelines for application.

It is important to establish a control tower, thus eliminating the ill effects of bureaucratic sectionalism in ministries and agencies.

The business sectors beset by labour shortages have such structural challenges as low wages and long working hours.

The problem won't be solved as long as these working environments are left intact while these sectors solely depend on a foreign workforce.

It is necessary to discuss the relevant issues from various angles, including the betterment of working environments.

The Japan News is a member of The Straits Times media partner Asia News Network, an alliance of 23 news media organisations.