BEIJING - Singapore and China's Guangdong province on Monday (Nov 18) pledged to open up more avenues for cooperation in the surrounding Greater Bay Area as both sides signed an agreement to deepen collaboration.

Mr Ong said at the meeting that both Singapore and Guangdong complemented each other. Guangdong, China's most prosperous province, lies at the heart of the Greater Bay Area (GBA) - a mega economic zone that includes nine cities in the province, Hong Kong and Macau - and is hungry for capital, talent and technology, he said.

This was something that Singapore could offer, he said, adding that as Singapore restructures its economy towards more research and innovation, what it needed were markets outside of the Republic.

"Guangdong is one market that we are familiar with, we can cooperate with. So I think on that basis, we come together as quite natural partners," he said in a speech at the SGCC meeting.

Both sides have marked out six areas of cooperation moving forward. There are in trade and investments; talent strategies; innovation; intellectual property (IP); financial services and smart cities.

During his speech on Monday, Mr Ong said that Singapore's investments into Guangdong have not only increased in the 10 years since the SGCC was established, but they have also become more diverse.

Cumulative actual investments to Guangdong have more than doubled from US$5.4 billion in 2008, to US$12.5 billion (S$17 billion) by the middle of this year. 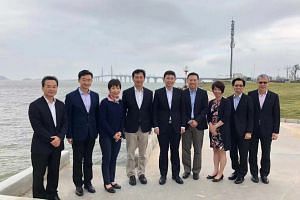 He noted that while investments began in more traditional areas such as real estate, logistics, trade and manufacturing, there are more high-tech and innovative projects today.

For instance, one of the 19 deals inked on Monday was between the National University of Singapore (NUS) and its Chinese partners to set up an institute in Guangzhou that aims to commercialise some of the research results NUS has accumulated over the years.

NUS' deputy president for innovation and enterprise, Professor Freddy Boey, said NUS would train 3,400 people from Guangzhou, who would under certain conditions be allowed to access NUS' IP library to look for solutions to meet needs in China.

The project would be the biggest NUS has done overseas, he said.

"In Singapore, we have a lot of research results but a very limited market, the GBA is a very important market," said Prof Boey.

He added that the people from Guangzhou would also pay full tuition fees, which would amount to about $500 million. The trade war between the US and China is also opening up areas for cooperation with trade flows being diverted, including to Asean, said Mr Ken Koh, group chief executive of logistics firm Yang Kee, which signed a deal with a Chinese logistics company.

"We are helping to bring Chinese companies to Asean where we have representation, and bring our customers to China," said Mr Koh.

Among other deals inked at the SGCC meeting were those related to shared bus services, smart city development and financial services.

Mr Ong, who is on a three-day visit to the provincial capital of Guangzhou, to attend the annual meeting also called on provincial party boss Li Xi on Monday.