A US spy agency was left red-faced after it inadvertently posted a tweet criticising China's treatment of President Barack Obama at his arrival in Hangzhou last Saturday (Sept 3) for the G-20 summit.

The tweet, which shared an article from The New York Times along with the caption "Classy as always China", was quickly deleted from the Defence Intelligence Agency's (DIA) Twitter Account.

It subsequently tweeted an apology: "Earlier today, a tweet regarding a news article was mistakenly posted from this account & does not represent the views of DIA. We apologise."

Earlier today, a tweet regarding a news article was mistakenly posted from this account & does not represent the views of DIA. We apologize.

When Mr Obama disembarked from Air Force One at Hangzhou's Xiaoshan International Airport, he did not use a red carpet staircase. Instead, he left the plane via a rarely used metal stairway.

The lack of fanfare has been the source of much debate, adding fuel to claims that China had given him a diplomatic snub to express displeasure over recent US moves. 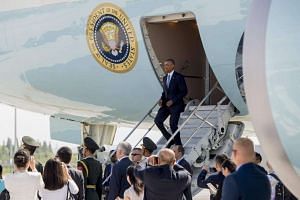 Lack of red-carpet staircase for Obama a snub?

There were also arguments between China and US officials - largely over media access - at the airport and throughout Saturday.

In response, Mr Obama has urged the media not to "over-crank the significance".

"This is not the first time that these things happened. And it doesn't just happen here. It happens in a lot of places, including, by the way, sometimes, our allies. Part of it is we also have a much bigger footprint than a lot of other countries," he explained.