A video of the pounding that Xu delivered on Wei, who was bloodied in the fight, has since gone viral.

The bout triggered an intense online debate over the merits of traditional martial arts versus modern fighting techniques.

A number of exponents - including the head of China's Wudang clan He Xirui and Shaolin monk Yi Long - have vowed to fight Xu, who went on to claim that traditional martial arts was outdated. 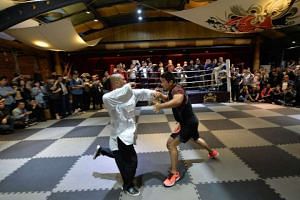 Xu, who runs two MMA clubs in Beijing, also challenged billionaire Jack Ma's bodyguard and two-time Olympic boxing champion Zou Shiming, offering 1.2 million yuan of his own money to anyone who defeats him.

Said Mr Chen: "I want him (Xu) to understand, he used this kind of extreme method to provoke Chinese traditional culture, and will need to pay the price."