BEIJING • China's consumers have cut back on purchases of everything from Apple iPhones to Swiss watches, as the trade war with the United States hits the economy.

Landing just days after hundreds of local companies issued profit warnings and multinationals sounded the alarm about softening demand, the week-long Chinese New Year holiday will provide the next litmus test of the resilience of the Chinese shopper.

Starting today, the seven-day period sees hundreds of millions of people travel within the country to see relatives, fly overseas to take vacations - and open their wallets to buy gifts. Last year, the Chinese spent 926 billion yuan (S$185 billion) at restaurants and stores ringing in the Year of the Dog.

This year's celebration is the first to take place during a trade war with the US, and as China's 1.4 billion people prepare to welcome the Year of the Pig, the data does not bode well.

The trade fight has dragged on China's stock and property markets, and gross domestic product in the final quarter of last year rose at the slowest pace since the global financial crisis.

Companies selling to middle-class consumers will be the most vulnerable this holiday as wealthier Chinese continue shopping but the more budget-conscious cut back, said Mr Adam Xu of consulting firm OC&C who advises retail and consumer companies on their China strategy.

"The slowdown in growth is happening and most likely in the mass part of the market," Mr Xu said. 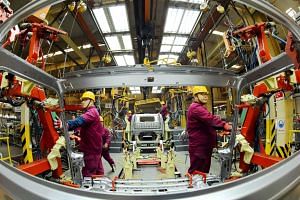 China slowdown continues with factory gauge down to 2016 level

China is cutting back on iPhones. Louis Vuitton handbags could be next

Here is the outlook for some industries that count on Chinese consumers spending to ring in the New Year holiday.

Demand for jewellery has traditionally climbed during the holiday because gold is seen as an auspicious gift from older generations to younger ones.

These days, it is not just the weak economy that has the bling industry feeling the holiday blues.

Mr Nikos Kavalis, London-based director of research firm Metals Focus, said buying "will not be what it used to be 10 years ago because a lot more Chinese consumers nowadays choose to travel abroad rather than go to their home town".

Many of the big luxury brands say that China's rich are still shopping hard.

But there have already been pockets of weakness.

Exports of Swiss watches to China slumped in December and Swatch Group reported last Thursday that China contributed to a slowdown in the fourth quarter.

Chinese consumers account for a third of global duty-free spending, and the economic slowdown has weighed on travel companies.

The Chinese New Year could be key to turning things around.

More than 400 million Chinese tourists are likely to travel domestically during the holiday, about 4 per cent more than last year, according to Citigroup.

Seven million Chinese will head to overseas destinations, an 8 per cent rise from last year.

With the yuan down over the past year, tourists may be heading to more affordable destinations in Asia and duty-free operators like Japan Airport Terminal could benefit.

Last year, Macau had more than 900,000 visitors during the New Year break, about 40 per cent more than the average week. Average hotel rates were about 2,000 patacas (S$330), almost four times the usual price.

Weakness in China's property and manufacturing sectors has dampened the annual outlook for the world's largest gaming destination. Analysts expect Macau's casino revenue this year to decline about 1 per cent from last year, according to a Bloomberg survey.

Holiday purchases will account for about one-quarter of total sales for Kweichow Moutai, producer of China's favourite baijiu liquor.

But demand for premium baijiu products has weakened from two months ago, according to a report published by China International Capital on Jan 23 that said prices for premium liquor had dropped by 20 per cent from last October.